Dell is rolling out updated and "reimagined" Precision and Latitude laptops sporting thinner and lighter profiles, intelligent features, and improved security. There are three new core additions in all—Latitude 9330, Latitude 7670, and Latitude 7770—all of which are built for the "future of hybrid work." What exactly does that entail?
Starting with the Precision 9330 (shown above), it brings a unique feature to the fold, a new "collaboration touchpad" with quick access during online meetings to the laptop's mic, webcam, chat controls, and screen sharing capability. Have a look... 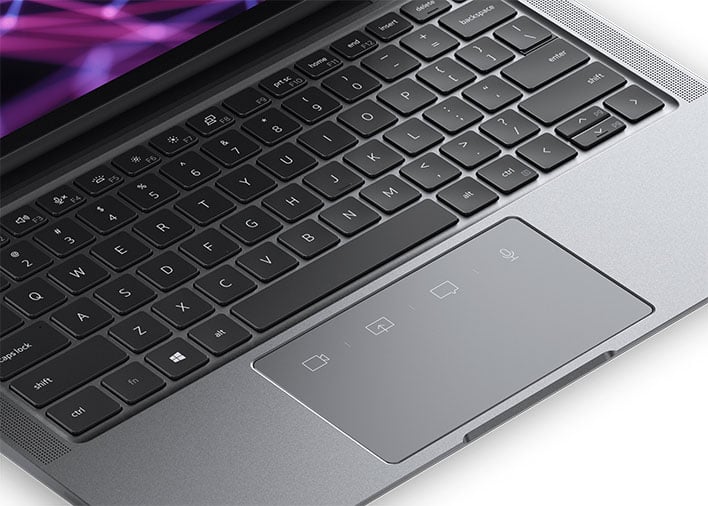 Dell is quite literally putting collaboration features at the user's fingertips. For users who spend a lot of time in Zoom meetings and the such, this could be a nifty time saver, versus fumbling around for the appropriate Function key or using a mouse to accomplish the same tasks. It's a non-obtrusive addition, too—these aren't extra keys added to the deck and they don't interfere with the operation of the touchpad.
The Latitude 9330 is built around Intel's 12th Gen Alder Lake platform and can be configured with up to a Core i7 vPro processor. Other notable hardware bits and features include up to 32GB of LPDDR5-5200 RAM, dual M.2 SSD slots for storage, Wi-Fi 6E connectivity, optional 4G/5G support, two Thunderbolt 4 ports with power delivery and DisplayPort (USB-C), a USB 3.2 Gen 2 Type-C port, an optional touch fingerprint reader in the power button, and fast charging (up to 80% within 40 minutes) via ExpressCharge.
This is a 2-in-1 device with a 13.3-inch touchscreen display (2560x1600, 16:10), with an 89% screen-to-body ratio. It measures 11.6 x 8.2 x 0.35-0.55 inches and weights a scant 2.8 pounds. It will be available in June with pricing announced closer to release. 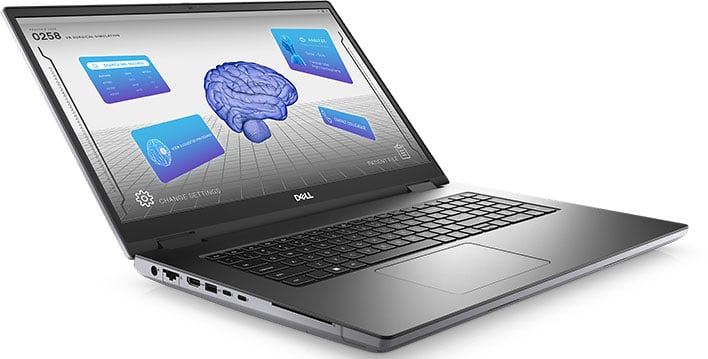 For more intense work at home chores, Dell is billing its retooled Precision 7700 as the world's most powerful 17-inch mobile workstation with "desktop-like performance on the go," and with the highest scalability across its portfolio.
There are two non-touch 17.3-inch display options, one with a 1920x1080 resolution and 60H refresh rate, and the other with a 3840x2160 resolution and 120Hz refresh rate.
Both are powered by up to a 12th Gen Core i9 processor (55W) flanked by up to 128GB of DDR5 memory. You may have seen leaks prior to today's announcement about Dell's new CAMM module, which stands for Compression Attached Memory Module. Today's announcement confirms it will use CAMM modules on the Precision 7700 as well as the 7670 (detailed below), though not exclusively—there will also be versions of these laptops with standard SODIMM memory up to 64GB (listed as "coming soon").
The easy knock is that proprietary hardware is more restrictive than standardized components. But the flip side to that argument is that something like CAMM is a better proposition than using soldered memory, which eliminates any kind of DIY upgrade path at all.
Moving on, the graphics options on tap here include optional discrete solutions from NVIDIA, including RTX A1000 (4GB), A3000 (12GB), A4500 (16GB), and A5500 (16GB), as well as a mobile GeForce RTX 3080 Ti (16GB) option.
Other features include up to 4TB of SSD storage, Wi-Fi 6E and Bluetooth 5.2 wireless connectivity (5G is optional), two Thunderbolt 4 ports, a USB 3.2 Gen 2 Type-C port, two USB 3.2 Gen 1 Type-A ports, HDMI 2.0a output, an Ethernet port, and a headset/microphone combo jack. 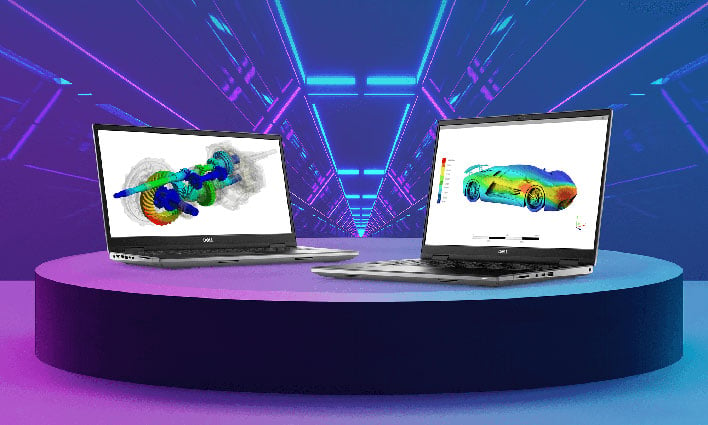