It never fails that when a game launches, players find a way to play it in ways that the developer never intended. Whether it's perfect Marine splits against Banelings in StarCraft II or rocket jumps in Quake III Arena, the best players can execute some incredible moves perfectly. Once again, the inevitable has happened, this time in Cyberpunk 2077. It seems that speed runners have found a way to get around Night City quick like a bunny without using any vehicles in CD Projekt Red's multi-million selling smash hit.

An in-game cybernetic implant called the Kerenzikov (installable by Victor Vektor the Ripperdoc) allows players to aim and shoot while dodging and gain a 1.5 second time slowdown bonus. The bonus is secondary here, though, as the point of these speed runs is dodging and having free aim at the same time. Once players get the repetitive sequence down, they can gallop through the city at speeds that developer CD Projekt Red never intended. Watch as Max Dakka on YouTube speeds around the beltway in just a couple of minutes. Who needs a train system when we can just run to the destination?

Once V has the Kerenzikov implant installed, the specific sequence is to dodge while aiming, then dodge without aiming, and then jump a couple of times. You'll know when the rhythm is right when you can repeat the cycle after the five-second cooldown has elapsed. In fact, the cooldown isn't even five seconds, since V can get cooldown reduction for their skills with enough points in the Body and Technical attributes. Once you hit a breaking point with skills and a Kerenzikov with a Legendary rarity, the cooldown is no longer the limiting factor, and it's up to players to have enough dexterity to pull off the moves at high speed.

As a result of that careful sequence of button presses and add-ons, V can hop, skip, and jump much faster than they can drive in a vast majority of vehicles. In the speed run linked above, Max Dakka takes it on the chin thanks to cars that appear out of nowhere. That's an issue we had just trying to cross the street in our performance review, but that problem gets exacerbated by the high-speed travel this technique achieves. Cars appear out of thin air and suddenly V is flat on their back after getting run down. 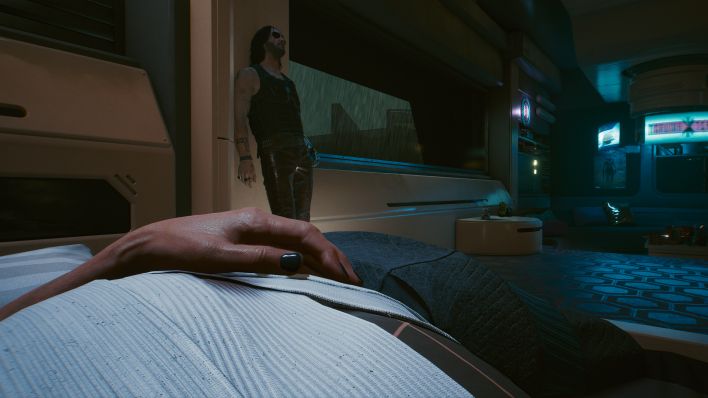 In related news, Reddit users have combined the Kerenzikov bunny hop technique with a katana to leap from enemy to enemy, getting one-hit kills all along the way, to clear an area of hostile targets. The video in Redditor Strikielol's thread is backed by a Limp Bizkit soundtrack showing off the incredible speed and dexterity that can only come from a cybernetically-enhanced being like V. The whole thing is sort of reminiscent of One More Level's cybernetic first person hack-and-slash Ghostrunner.

So far, the videos we've seen all use the PC version of Cyberpunk 2077 to pull off this feat. Presumably this is a little tougher to do on the console versions, considering the PS4 and Xbox One have trouble playing the game at even normal speeds. If you're playing one of the console versions, you might want to take advantage of the various refund options and try it on the PC. Despite its issues, Cyberpunk really is a pretty good game, and it's really fun to see players take it to new heights and new speeds.