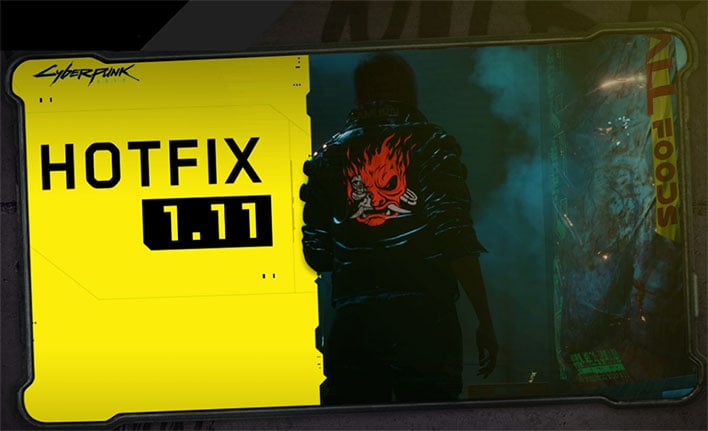 In a perfect world, every major game update would address any and all problems plaguing an initial release. Or at least the majority of issues. That is what CD Project Red attempted to do with its first major patch (version 1.1) for Cyberpunk 2077, and while it did squash a whole bunch of bugs, it introduced some new ones, including a glitch that can prevent players from progressing in the game. Fortunately, a hotfix for that bug is now available.
The main issue with the version 1.1 patch is that it essentially breaks the "Down the Street" mission. As part of that missing, in-game character Takemura is supposed to holocall the player for assistance. However, the 1.1 patch inadvertently nuked the dialog with Takemura, which in turn prevented players from progressing in the game.
Players tried reloading from a previous save, but that did not work either. What does work, however, is applying the new version 1.11 hotfix.
"It occurred for some players during a holocall with Takemura, when using a save made on version 1.06 with 'Down on the Street' quest in progress at 'Wait For Takemura's call' objective. After loading such a save on version 1.1, the holocall would lack dialogue options and block interactions with other NPCs," CD Projekt Red explains.
That is now fixed. The incremental update also fixes a bug affecting item randomization, which gets restored to its previous state after applying the hotfix.
This is not intended as a cure all, as Cyberpunk 2077 launched to numerous bugs and complaints of performance issues. There have been multiple class-action lawsuits filed in the wake of the launch, and the game remains delisted from Sony's PlayStation store. Another major update to the game is expected next month.
In the meantime, the version 1.11 hotfix is available now for PC, consoles, and Stadia.