The past few months have been a whirlwind of hardware launches and subsequent shortages, making for a frustration situation for buyers further exacerbated by competition from scripted bots, tariffs leading to higher prices on some components, and cryptocurrency mining. But is there more to worry about as well? Interestingly, a custom PC builder out of North Carolina claims it is seeing a higher than usual failure rate on AMD's latest generation Ryzen 5000 series desktop CPUs.
These are the chips that are based on AMD's highly touted Zen 3 architecture. For the record, we experienced no unusual issues during our Ryzen 9 5950X and 5900X review, which according to PC builder PowerGPU, had the highest failure rates of all four available Zen 3 desktop processors, within its walls. And by failure rates, the company is talking about chips that are dead on arrival (DOA). 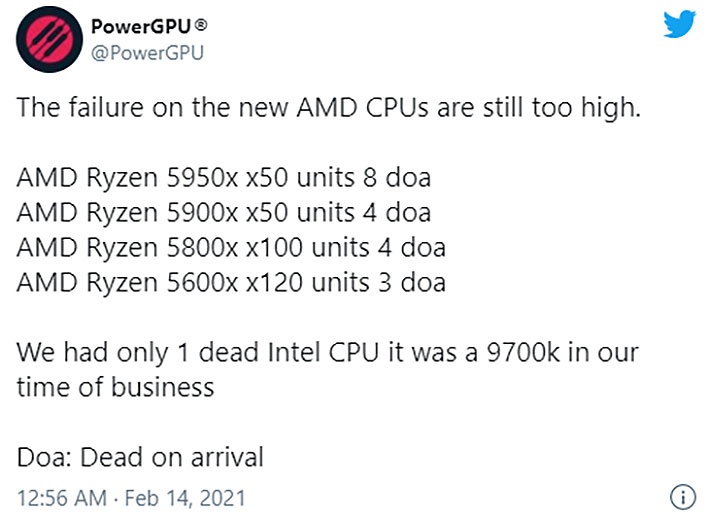 In a tweet that was later deleted, system builder PowerGPU raised eyebrows by claiming an unusually high failure rate for AMD's Ryzen 5000 series CPUs
PowerGPU says it received 50 units each of the Ryzen 9 5950X and Ryzen 9 5900X, of which eight of the former were DOA, and four of the later were as well. That works out to 12 out of 100 chips from within the Ryzen 9 family. In addition, the builder says it received 100 units of the Ryzen 7 5800X, of which four arrived DOA, and 120 units of the Ryzen 5 5600X, of which three were defective.
That is 19 out of 320 chips, for a failure rate of nearly 6 percent. In contrast, the company said it has only received a single dead Intel chip, a Core i7-9700K, in the past two years. When asked how many Intel CPUs it receives versus AMD chips, the company replied, "Before the [Ryzen] 5000 series, it was 80 percent Intel and 20 percent AMD and we only had 1 Intel CPU die in the past 2 years."
According to PowerGPU, it is not just the latest AMD CPUs that are failing at a higher clip than Intel, it is also motherboards based on the accompanying 500-series chipset. These have the "highest failure rate," the company says. "Every week it's at least 3-5 boards DOA from B550 to X570's," PowerGPU states in a follow-up tweet. 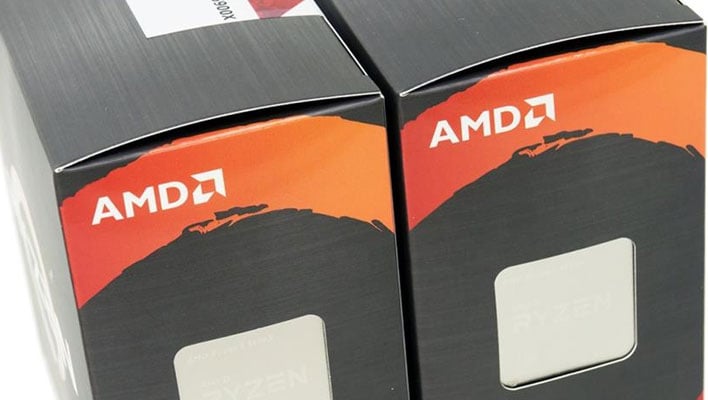 Adding more intrigue to the situation, PowerGPU seems to suggest that even some non-DOA chips sometimes have problems, in the short time it has been implementing them into builds. A user commented in the Twitter thread that they sent in their Ryzen 9 5900X because their "USB 3 lanes were dead" and other "weird stability issues." PowerGPU replied to the post saying, "Yes we have had that as well. Just weird issues with certain ones."
The situation caught the attention of a prominent leaker on Twitter, who claims PowerGPU is not the only one running into trouble with Zen 3.
"Actually, in Korea, it was quite quiet about this issue. As I checked urgently, there have been frequent postings complaining of problems mainly on B550X/X570 mobo in recent months," @harukaze5719 said.
At the same time, the same leaker says it was told by a custom DIY PC builder in Korea that PowerGPU's alleged failure rate is "ridiculous," and noting that the sample size is too small, since we're only talking about a few hundred CPUs.
Yet another prominent individual weighed in, that being Yuri Bubliy, creator of the popular ClockTuner for Ryzen (CTR) utility. According to Bubliy, the numbers posted by PowerGPU do not include working Ryzen chips with "poor FCLK overclocking capabilities" or those with "incorrect CPPC tags relative to FIT and temperature."
We will be keeping an eye on the situation to see if anything further develops. As things stand, we have a single PC builder raising eyebrows over a claimed high DOA rate among a few hundred CPUs received, and a bit of subsequent rabble-rabble in the Twitter thread bringing it to attention. We're not dismissing the builder's claims, but likewise, we're not sounding the alarm, either. We'll have wait and see if more complaints surface.

PowerGPU ended up deleting its original tweet, and with the conversation that followed in the Twitter thread (though we posted the relevant quotes in the original article above). Now a day later, the system builder posted another tweet, saying it is working with AMD on the matter. Have a look...

"We just had a chat with AMD. We are going to work together testing out some CPUs and motherboards," PowerGPU wrote. The company went on to thank AMD for reaching out.
There are a multitude of reasons why a CPU might fail to POST, not all of them due to a defect in the actual silicon. In our experience, actual CPU failures are extremely rare. Cooling, improper installation, an incompatible BIOS, and even RAM can play a role in whether a system boots correctly or not.
From the outside looking in, there is no way to know for sure what is going on. That said, the number of CPUs purportedly arriving DOA in addition to there supposedly being 3-5 accompanying dead X570 and B550 motherboards per week seems highly unlikely. Hopefully AMD and PowerGPU can get to the bottom of the situation soon, and offer some clarity on the subject.