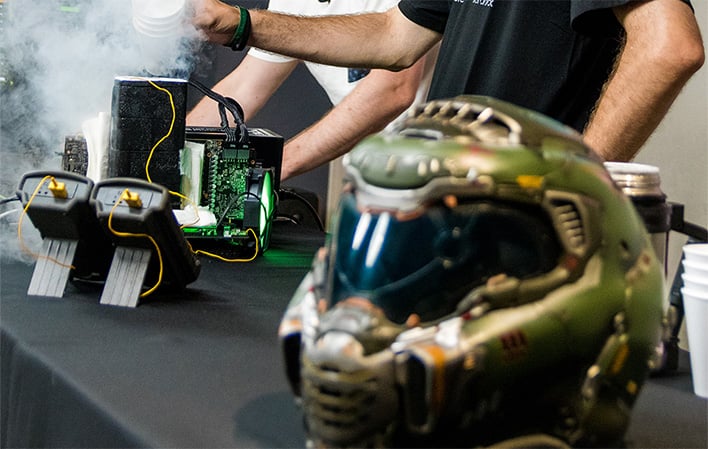 It is official, the ability to run Crysis is no longer an appropriate metric for measuring a PC's performance potential. I propose a new query—can your PC run Doom Eternal...at ONE THOUSAND frames per second!?!? Not at stock, it can't, and I doubt NVIDIA's upcoming graphics card will move the needle to four-digit territory. But give a person some liquid nitrogen and, well, it's entirely possible.
I know this because it's been done, on a system equipped with an Intel Core i7-9700K and NVIDIA GeForce RTX 2080 Ti. Here's the thing—id Software's lead engine programmer Billy Khan revealed in March that id Tech 7 was capable of pushing 1,000 FPS in Doom Eternal, provided the hardware exists to allow for that kind of performance.
There is not a combination of a stock clocked CPU and GPU that will yield 1,000 FPS in Doom Eternal, but undeterred by this, Bethesda's Polish community manager, Lukasz Lesniewski, put the wheels in motion to make the feat happen, on heavily overclocked hardware.

"The goal was straightforward but daunting: Achieve and record Doom Eternal running at 1,000 frames per second," Lesniewski explains.

He contacted the head of events at Polish hardware retailer x-kom, which in turn led to the company's head of research and development, Marcin "Ryba" Rywak, teaming up with tech blogger Piotr "Lipton" Szymanski. They then assembled a system with the following hardware...
That is a meaty system even without an overclock. And with an initial overclock, the team was able to hit around 500-600 FPS in Doom Eternal. Impressive, but only about halfway to their goal. The decision was made to bathe both the CPU and GPU in a steady supply of LN2, which runs at -196C. And then it happened.

"On day two, the moment of glory finally came. The Doom Slayer was walking through the opening corridor of Doom Eternal’s 'Hell on Earth' level when all eight CPU cores clocked at nearly 6.6GHz, and the frame meter registered exactly 1,006 frames per second. It even went up as high as 1,014 FPS during a tutorial map, exceeding the 1,000 FPS goal with frames to spare," Lesniewski says.
Obviously this is not a practical solution to achieving ultra-high framerates—LN2 is dangerous, and really only useful (in this context) for chasing records, not day-to-day use. But it is a remarkable achievement nonetheless.