You might be having a difficult time finding a Ryzen 5000 series processor in stock (and priced according to the MSRP), but when you do manage to get your hands on one (if you are in the market for a Zen 3 chip, that is), there will be an updated third-party utility waiting for you to help get the most out of your chip. I'm talking about ClockTuner for Ryzen (CTR), which has just been updated to version 2.0.
CTR is a relatively new utility developed by Yuri Bubliy (@1usmus on Twitter), the same person responsible for the popular DRAM calculator for Ryzen utility. It offers finer grain control over certain Ryzen CPUs, to enable potentially higher overclocks and better overall performance. And it works its magic by auto-tuning performance and power configurations in Windows environments (you need .NET installed).
The latest version adds support for Zen 3, as well as Ryzen Renoir APUs. It also incorporates a brand new 'Hybrid OC' mode, which utilizes both manual OC and PBO at the same time. 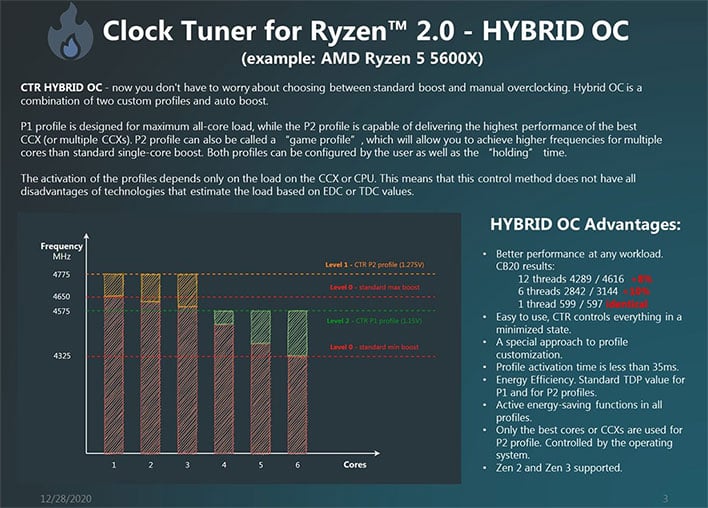 "Now you don't have to worry about choosing between standard boost and manual overclocking, Hybrid OC is a combination of two custom profiles and auto boost," Yuri explains.
When asked on Twitter if the Hybrid OC mode translates to "full automatic and completely stable and safe," Yuri simply responded, "Yes." And according to the slide they shared, it offers better performance at any workload. For those who want to try it out, the Hybrid OC feature works with both Zen 3 and Zen 2 processors.
Yuri also updated the user interface. Have a look... 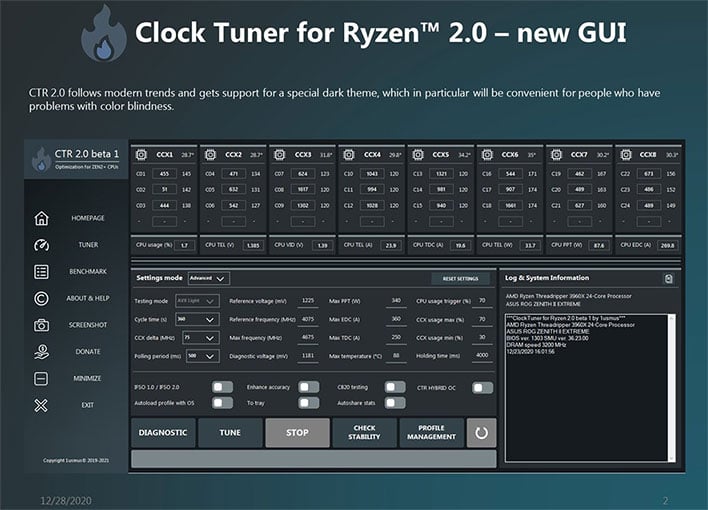 There is now support for a special dark theme. Otherwise, it looks mostly the same, with navigation menus arranged vertically on the left-hand side, and the main window providing various settings, details, and options.
As with before, CTR 2.0 works at the Core Complex  (CCX) level, where it is possible to undervolt each of the clusters individually. This also works without disabling any of AMD's existing energy saving technologies. In addition, it configures overclocked settings depending on how the clusters respond, using a step-by-step algorithm to adjust the frequencies of each CCX.
This is all purportedly improved in the version 2.0 release. The latest version offers new monitoring as well, and no longer needs Ryzen Master. 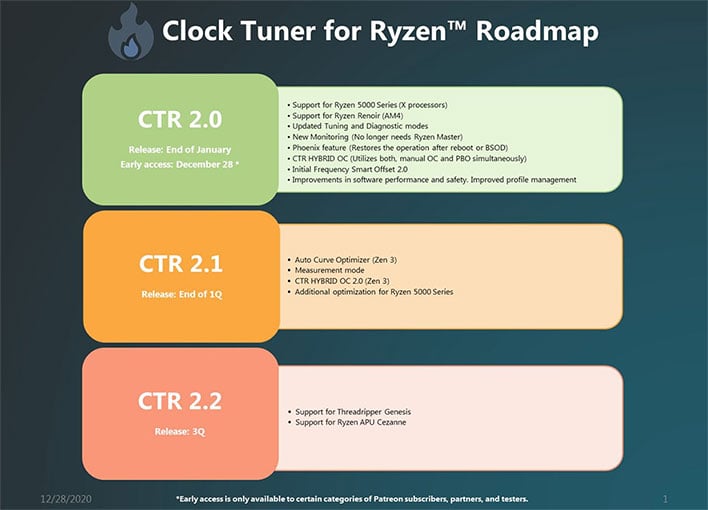 Looking ahead, Yuri plans to release a version 2.1 update at the end of the first quarter of next year, which will add an auto curve optimizer for Zen 3, a measurement mode, more optimizations for Ryzen in general, and tweaks to the Hyrid OC mode.
Then in the third quarter of next year, CTR 2.2 will support a new round of Threadripper processors (codenamed Genesis or Genesis Peak, along with Ryzen APUs based on Zen 3 (codenamed Cezanne).
As for CTR 2.0, it is available now to certain categories of Patreon subscribers, and will release the general public by the end of next month.