It is certainly a tough time to be a gamer in need or want of a PC hardware upgrade. Some of the newest and most desirable parts are in short supply, including the latest generation graphics from AMD (Radeon RX 6000 series) and NVIDIA (GeForce RTX 30 series). This has led to inflated pricing by marketplace sellers, but there are two other reasons why GPU prices are poised to shoot up—tariffs and cryptocurrency mining.
Starting with the former, President Trump imposed tariffs on hundreds of billions of dollars worth of Chinese products in 2018, as outlined by a document at the Federal Register. As a result, thousands of companies asked for and were granted temporary exemptions. This helped keep pricing on certain PC hardware stable, including graphics cards and motherboards. However, those exemptions expired when the calendar switched to 2021.
The tax on imported goods are anywhere from 7.5 percent on the lower end to 25 percent on the higher end. What this essentially means is that for the time being, the cost of building a PC is about to go up, as manufacturers pass on the increased costs to consumers. Same for prebuilt systems, presumably. We are not talking about a theoretical rise in prices, either.
Over on Facebook, Juan Jose Guerrero III, technical product marketing manager at ASUS, issued a statement on the matter, saying ASUS is raising its MSRPs. 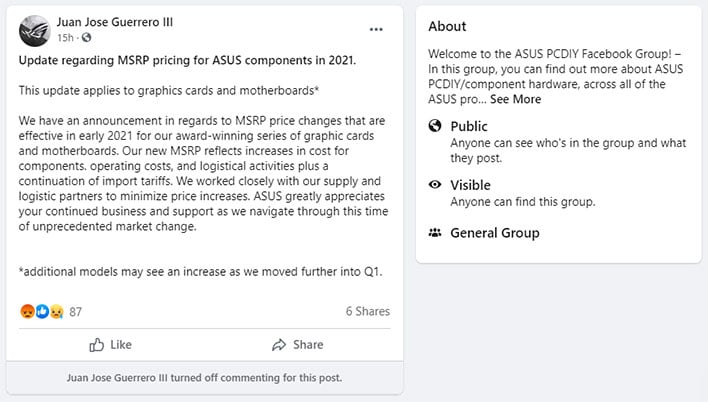 "We have an announcement in regards to MSRP price changes that are effective in early 2021 for our award-winning series of graphic cards and motherboards. Our new MSRP reflects increases in cost for components, operating costs, and logistical activities plus a continuation of import tariffs. We worked closely with our supply and logistic partners to minimize price increases. ASUS greatly appreciates your continued business and support as we navigate through this time of unprecedented market change," Juan wrote.
The MSRP price hikes apply to the company's graphics cards and motherboards. And as spotted by users on Reddit, ASUS has already raised the price of some graphics cards. For example, its ROG Strix GeForce RTX 3090 has gone up from $1,799 to $1,979 in the company's webstore. Likewise, ASUS raised the price of its TUF Gaming GeForce RTX 3080 from $749 to $859.

A potential silver lining is that the incoming administration could remove the tariffs, depending on how President-Elect Joe Biden wants to handle things. If that is the case, these price hikes could be short lived. However, if that does not come to pass, then we could be looking at higher prices on PC hardware for the foreseeable future.
Of course, as it applies to the latest GPUs, they are almost out of stock anyway. That could be the case for several more weeks, and perhaps months. Exacerbating the situation is the recent rise in Bitcoin pricing, which has surged north of $30,000 (it's valued at $31,575.40 at the time of this writing). Ethereum has been on the rise as well.

Specialized ASIC hardware is more widely used to mine cryptocurrency these days, though not exclusively—there are still mining operations that leverage GPUs. Additionally, it is common for folks to mine certain types of cryptocurrency that are still better suited for GPUs, and then trade in their value for Bitcoin. So the skyrocketing value of Bitcoin is very much relevant to the ongoing GPU shortage, and inflated pricing by second-hand sellers.
Are we having fun yet?