Alder Lake is almost here (we know, it feels like we've been saying that forever, but it's really true!), and at minimum, upgrading to a 12th Gen Intel Core processor also necessitates a new motherboard (Z690). You may also opt to jump on the DDR5 bandwagon, but what about your cooler? Some companies have announced additional brackets so that existing coolers will work with Alder Lake. Corsair is among them, with a new Retrofit Kit for its expansive lineup of all-in-one liquid coolers.
The caveat is that it's not free. Fortunately, it's also not expensive—the asking price is $2.99 (€2.99 / £1.99) with free shipping anywhere in the United States or Europe. According to the press release, anyway, as the actual product page has it listed for $4.99, with a bright yellow "Notify Me When In Stock" button. Hopefully when it's actually in stock, the price will be adjust, but we'll see.

Either way—penny shy of $3 or $5—it's a much cheaper proposition than buying a brand new cooler, if you don't have to. The 'kit' appears to really just be a baggie of standoffs, which adapt existing LGA 115x and 1200 brackets to be compatible with LGA 1700, the new socket design that Intel is implementing with its Alder processors.
"We’re excited to offer these easy-to-use kits to help Corsair customers get ready for the new LGA 1700 socket," said Aaron Neal, Director of DIY Product Marketing. "Given the sheer power and performance of Intel Alder Lake processors, CPU coolers are poised to play a critical role in PC builders’ new systems, and this kit makes that positioning possible." 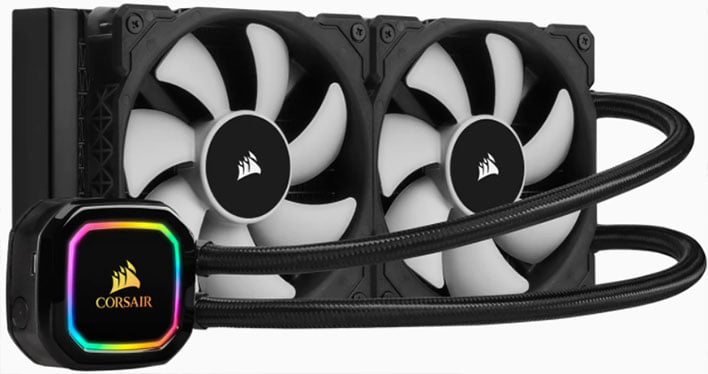 Corsair is not so excited that they're offering the conversion kit for free, like a few other companies have done, but at least they're inexpensive. They also cover a wide range of liquid coolers...
Going forward, Corsair says it has begun making CPU coolers with LGA 1700 support out-of-the-box, with the necessary hardware for the LGA 1700 socket included. Those will be available before year's end. In addition, all future CPU coolers from Corsair will support Intel's upcoming socket for Alder Lake.
If for whatever reason you own one of the above coolers but don't have all the necessary mounting hardware from the original purchase, Corsair is also offering a more encompassing Elite Series Retention Kit for $14.99.
Rumor has it Alder Lake will be announced this month, followed by retail available in November. We're now halfway through October, so Alder Lake should be getting a formal launch any day now.