Corsair is officially in the monitor game, with its first-ever gaming monitor release. Technically you could say the company entered the fray a couple weeks ago when it announced its Xeneon 32QHD165, but that was merely an introduction—the 32-inch gaming monitor wasn't actually available to buy, until now. It's not cheap, though.
The Xeneon 32QHD165 is "built from the ground up for gamers and creators," and carries a $799.99 MSRP. Perhaps pricing will come down after some time goes by (or during the upcoming Black Friday and Cyber Monday festivities), especially as it lands in the hands of more retailers. But for now, it's only available from Corsair, and for its full list price.
So why does $799.99 get you? In this case, an ultra-slim 32-inch monitor designed around an In-Plane Switching (IPS) panel, with a 2560x1440 (QHD) resolution, a fast 165MHz refresh rate, less than a 3ms gray-to-gray (GtG) response time (or 1ms if using MPRT). 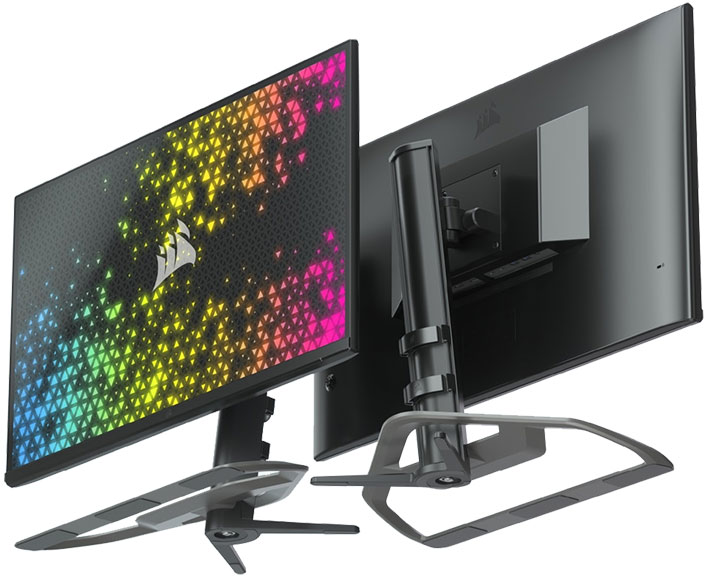 In addition to boasting a speedy refresh rate and low response time, this is a FreeSync Premium display with variable refresh rate (VRR) support, to keep the action smooth and synced with your graphics card. And if you own an NVIDIA GeForce card, note that the Xeneon 32QHD165 is also certified as being G-Sync Compatible.
Corsair's first gaming monitor uses quantum dot technology for richly colored visuals. It offers up a wide color gamut by multiple standards, including 100 percent coverage of both the sRGB and Adobe RGB color spaces, and 98 percent of DCI-P3.
This also passes muster for VESA's DisplayHDR 400 certification, with a rated 440 nits brightness for HDR content (and up to 400 nits for SDR). You'll probably want something brighter if HDR is your primary consideration, but otherwise, you can view HDR content on this display.
Other features include a die-cast aluminum stand, a built-in mounting point with 1/4-inch threading for rigging systems like the Elgato Multi Mount, iCUE lighting compatibility, and various input options, including two HDMI 2.0 ports, a DisplayPort 1.4 port, and a Type-C DisplayPort (Alt Mode).
If this tickles your fancy and you have the requisite skrilla, you can buy the Xeneon 32QHD165 from Corsair's webstore.