Cold Moon 2021: How To See The Longest Full Moon Of The Year

The next full moon is just around the corner and it is one with many names. Also, this polyonymous moon will be at its fullest tomorrow, December 18, 2021.

The Moon has been in the headlines recently for a few reasons. NASA is set to launch its first Artemis mission soon that will include sending humankind back to the surface of the Moon. NASA also plans on eventually setting up a lunar base that will serve as a go-between for missions to Mars and beyond, and recently said it is looking at possibly using nuclear fission to power it. But it is all about the Moon tomorrow night as it will be in full view and shining at its brightest.

While the Moon will be at its fullest tomorrow night around 11:36 p.m. EST, it will be appear full beginning tonight through Sunday, making it a full Moon weekend. Due to the late hour, some calendars will show the full Moon taking place on Sunday as they adhere to Coordinated Universal Time (UTC). So, if you are an avid fan of our lunar friend in space and want to see it at its fullest, be sure to make the necessary time zone adjustments.


This particular full Moon has picked up a few names over the years. Old European names include the Moon before Yule, due to it being the full Moon before winter solstice, and the Oak Moon. Winter solstice, also called hibernal solstice, is when the path of the Sun is farthest south in the Northern Hemisphere on December 21st or 22nd, and farthest north in the Southern Hemisphere on June 20th or 21st.
This particular winter solstice will be on December 21st as the Sun travels the shortest path through the sky, providing the shortest day and longest night of the year. Yule was celebrated as a three-day event in pre-Christian Europe and later changed in the 10th century when King Haakon I of Norway associated Yule with Christmas. The Oak Moon name is believed by some to go back to ancient druid traditions of harvesting mistletoe from oak trees. 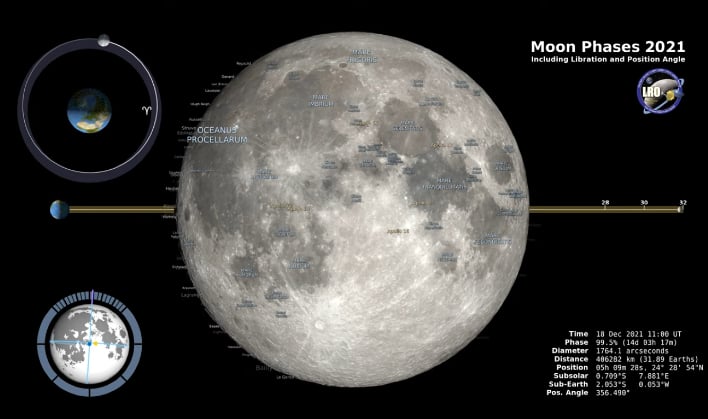 Yet another name for this full Moon is derived from Buddhists of Sri Lanka, the Unduvap Poya. It is believed that the Buddha attained enlightenment by meditating beneath a Bodhi Tree in India. The daughter of Emperor Asoka in 3rd century BCE, who was also the founder of an order of Buddhist nuns, brought a branch of this tree to Sri Lanka. That branch was planted in 288 BCE by King Devanampiya Tissa in the Mahamevnawa Park in Anuradhapura, Sri Lanka and is said to be the oldest living human-planted tree known with an actual date it was planted.

Some also refer to this moon as the Chang'e Moon, after the three Chinese lunar landers that touched down on the Moon during this time of the year. The missions derived their name from the Chinese goddess of the Moon, Chang'e, who was thought to live on the Moon with her pet rabbit, Yutu.

A few more names that have been attached to this full Moon are the Cold Moon, Frost Moon, or Winter Moon from the Maine Farmers' Almanac. These names were what the Native Americans referred to the full Moon when the almanac was being published in the 1930's. Over time the names have been widely adopted.

Regardless of what name you give the upcoming full Moon, it should be a beautiful spectacle to behold. Be sure to bundle up if you are planning to go outside and enjoy looking up at the big, bright full Moon this weekend.