At long last, Amazon's Prime Day deal deals event is in full swing, and that means bargains on just about every kind of item imaginable. We'll be posting some of the niftier deals in various product categories as the two-day sales bonanza goes on, but in this article, we're focused on dozens of free games that are up for grabs, including Mass Effect Legendary Edition and Need for Speed Heat.
The only real catch with Amazon's Prime Day event is that it's exclusive to Prime members. There are various pricing tiers, depending on your situation. A regular Prime membership runs $139 per year or $14.99 monthly if you're feeling non-committal, and comes with a 30-day free trial. Qualifying students, on the other hand, get a 6-month trial and then pay either $69 annually or $7.49 per month. Finally, qualifying ETB and government assistance recipients can sign up for $6.99 per month, with a 30-day free trial to boot.
So here's the deal for the frugal among you, who are new to Prime—you can sign up for a free trial, claim all 35 games that are up for grabs at absolutely no cost, and then decide whether to keep your membership beyond the trial of wave goodbye before it renews. Whichever you decide, the games are yours to keep once claimed (barring any licensing shenanigans).
The headliner among the bunch is Mass Effect Legendary Edition, a collection of 4K remasters of Mass Effect, Mass Effect 2, and Mass Effect 3 with over 40 DLC, including promo weapons, armors, and packs. This is normally a $60 collection. 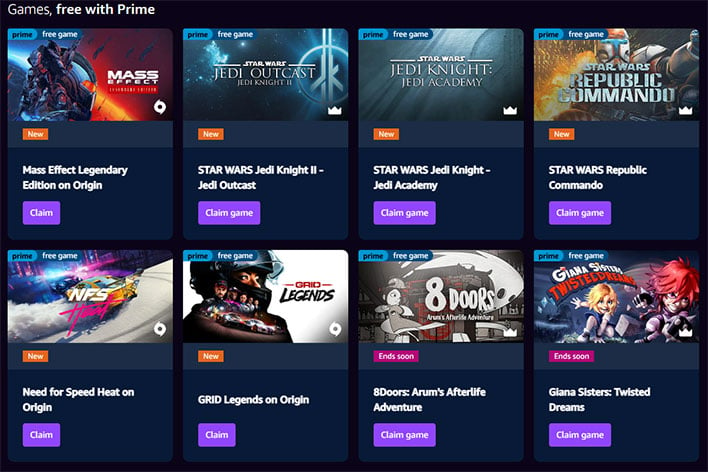 Here's the full list of games...
Claiming is fairly straightforward and easy for the most part—just head to the Prime Gaming page and click the claim button underneath each game. In some cases there's an extra step (for Origin and Legacy Games titles), which is slightly annoying. It would also be helpful if there was a 'claim all' button. But these are minor inconveniences for what amounts to dozens of free titles.