The performance of the just-released Radeon RX 6500 XT may not quite be what people were hoping for from a brand-new graphics card in 2022. Technically speaking, solid 1080p gaming performance in under 100 watts really isn't all that bad, but the historically-low prices of Polaris-based products like the Radeon RX 470 and RX 570, which can match or exceed the new mini-Radeon in some games, have taken some of the wind out of the new "$200" card's value proposition.


If you put the performance of the Radeon RX 6500 XT in the context of integrated solutions, though, the equation changes completely. Integrated GPUs with real solid 1080p-and-high-settings performance haven't really happened outside of a few rare experiments, like Intel's Hades Canyon NUC. But of course, it's a discrete GPU; why would you compare it to integrated solutions?
Well, because, as famed leaker Olrak points out on Twitter, the tiny little Beige Goby GPU that powers the RX 6500 XT could actually fit on a Socket AM4 interposer quite neatly alongside a Zen 3 Core Complex Die (CCD). At 107 mm², Navi 24 is actually smaller than the Zen cIOD chiplet that handles external connections for Ryzen processors. 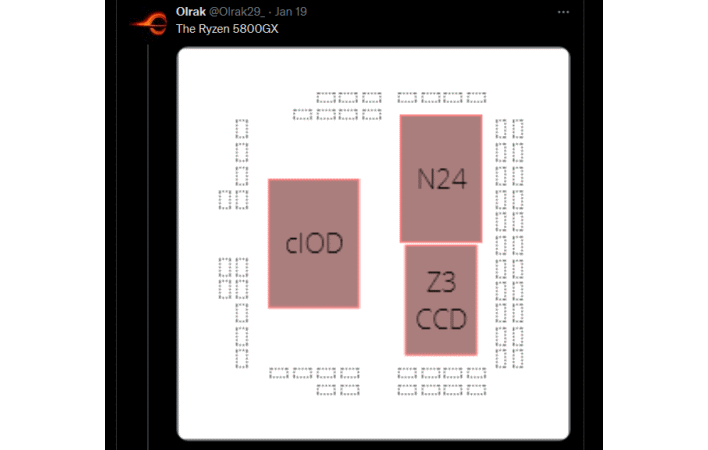 Is AMD planning a processor like this? Probably not. After all, new product development for the AM4 platform has most likely stopped, and the DDR4 memory interface that Socket AM4 uses wouldn't provide nearly enough bandwidth to make use of the relatively powerful Beige Goby GPU. The name "Ryzen 5800GX" is likely just a bit of whimsy on the part of Olrak. It's still an interesting thought experiment, though.

It becomes even more interesting if you think about the prospects of Socket AM5 and its DDR5 memory interface. DDR5 has a lot of advantages over DDR4, but the most obvious (and most relevant) one is simply that it runs at much higher transfer rates, offering drastically-improved bandwidth for integrated graphics solutions.

According to earlier rumors, AMD is already planning something similar to this for its Zen 4 processors. "Raphael", the higher-power line for both desktops and laptops, is expected to come with up to 16 cores, yet still include a small GPU, not unlike what Intel does on its most powerful desktop processors. Meanwhile, "Phoenix," primarily intended for laptops, is rumored to top out at 8 cores, but may include a more powerful integrated graphics processor. Something as powerful as Navi 24? That remains to be seen.