In theory, there should not be any further delays to Cyberpunk 2077, one of the most highly anticipated games ever (certainly in recent memory). Things could still happen, but developer CD Projekt RED shared some encouraging news—Cyberpunk 2077 has gone gold. That means the game is essentially finished and ready to go.
You can bet the developers are still hard at work polishing up the experience, whacking bugs over the head, and so forth. But any further work on the game will arrive through patches and updates. The game itself is now in a state that it can be mass produced on optical discs and sent out to retailers, for those who still buy physical media.
The announcement comes more than a month before Cyberpunk 2077 is scheduled to release, on November 19 for PC, Xbox One, and PlayStation 4. It will also be available on Google's Stadia platform sometime this quarter, and then ship to Xbox Series X/S and PlayStation 5 next year, presumably with optimizations for those consoles. Good stuff.
In related news, a photo of the full map of Cyberpunk 2077's Night City has leaked. This is the map that will be bundled into retail box copies of the game, when it ships next month. Have a gander... 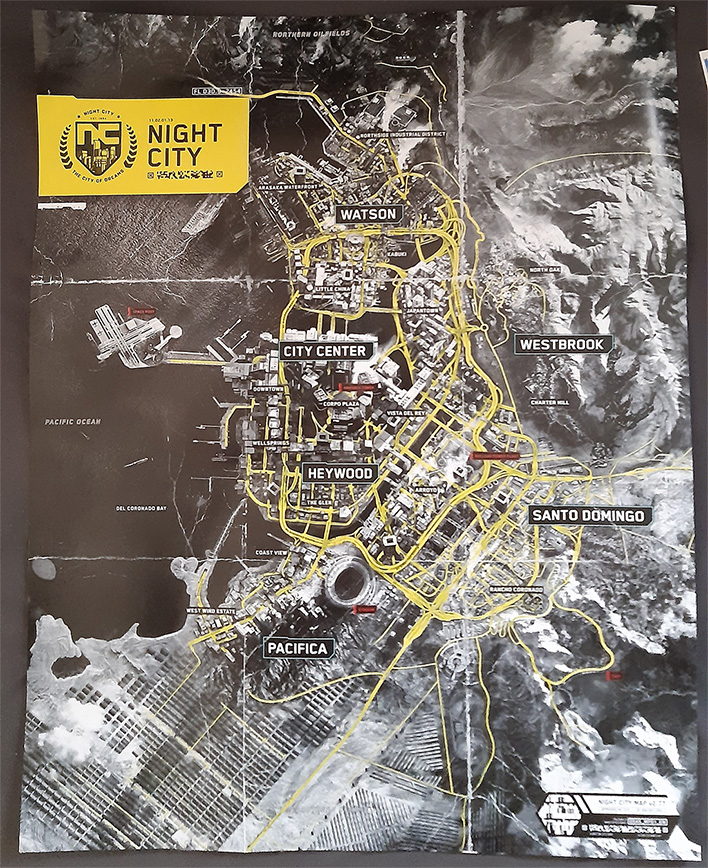 The map was first posted to Resetera, along with a few other photos of the retail box contents. You can click/tap the image above to enlarge it for a better view of the streets and various district occupying Night City.
This could be just a partial view of the game's landscape. In other words, it is possible that portions of the game will extend beyond the borders of Night City, though that remains to be seen.
If you are planning to play it on PC, the minimum requirements call for an Intel Core i5 3750K or AMD FX-8310 CPU, GeForce GTX 780 (3GB) or Radeon RX 470 GPU, 8GB of RAM, 70GB disk space (SSD recommended), and 64-bit Windows 10 or 7. The recommended requirements bump the specs up to a Core i7-4790 or Ryzen 3 3200G and GeForce RTX 1060 (6GB) or Radeon R9 Fury, and drop Windows 7 from the equation.