It should come as no surprise that there's been a lot of hype surrounding the release of Cyberpunk 2077. It doesn't help that the game has been delayed multiple times, which has drawn even more attention to CD Projekt Red's latest masterpiece.

With that being said, if you haven't already preordered the game on any platform so far, Google is offering up a rather intriguing deal for those that are potentially looking to try out Stadia game streaming. If you preorder the game on Stadia, Google will give you a free Stadia Premiere kit. This kit includes a single Stadia controller, a Chromecast Ultra and a one-month trial to Stadia Pro (if you're a new customer). 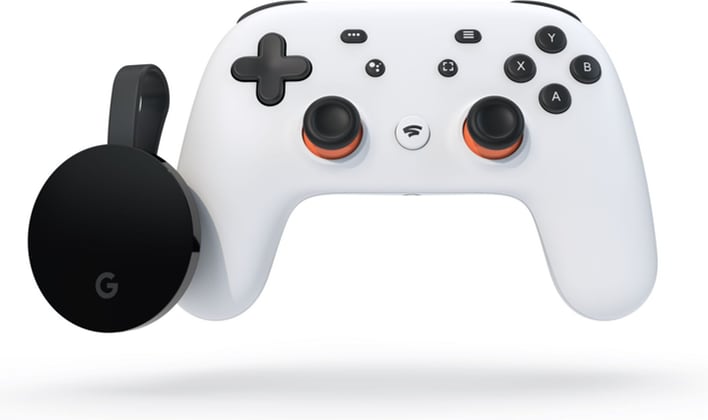 For those not in the know, Stadia Pro gives you access to 4K HDR streaming, 5.1 surround sound along with access to free games, exclusive game discounts, and free games that you can stream. The Stadia Premiere kit normally costs $100, so this is a pretty sweet freebie that Google is throwing in for Cyberpunk 2077 preorders.

Google says that the Stadia/Cyberpunk 2077 promo offer is available to those who preorder the game through December 17th, or while supplies last. Google is limiting the offer to one freebie per account; however, you can get up to 6 per household. Google says that you will be sent an email with a code to redeem your Stadia Premiere kit, which will be shipped to you.

Given that supplies are limited, we'd suggest that you preorder now rather than later ahead of Cyberpunk 2077's December 10th launch (if CD Projekt Red can actually stick to that date this time around). Just remember that you'll be paying the full $59.99 cost of the game, instead of the discounted $49.99 pricing that we've seen for preorders on other platforms.