Call of Duty: Warzone Lands March 10 As Free-To-Play Battle Royale Juggernaut With Up To 150 Players

Updated March 9th @ 1:27pm
Activision has gone official with Call of Duty: Warzone, and confirms that it is a cross-platform battle royale game that is free-to-play and will support up to 150 players. The game will launch tomorrow at 11am EST, and will be available on PC, PlayStation 4 and Xbox One. You can read more about the game via this blog in the source link below, and check out the trailer for Call of Duty: Warzone here:

Our original, unedited story continues below:


Call of Duty fans who have been itching for some more battle royale gameplay will get their wish when Warzone drops, whenever that might be. It has to be coming soon—there are too many leaks and rumors for Warzone to still be way out in the distance, including a recent glitch that had thrust players into the battle royale mode. Now some raw footage has emerged.
Battle royale is not new to the CoD world—Black Ops 4 already went down that path a couple of years ago. However, it appears the implementation in Warzone will be a bit different. Players will hunt for cash while trying to stay alive in Warzone as a poisonous cloud shrinks the battlefield, and then use the money to buy stations that will give them temporary super powers.
YouTuber and CoD enthusiast Chaos posted the aforementioned footage, which consisted of around 11 minutes of gameplay. Unfortunately, it is no longer available to view—YouTube indicates it has been removed by the user, most likely at the request (demand?) of Warzone publisher Activision. Regardless, it's not longer viewable. 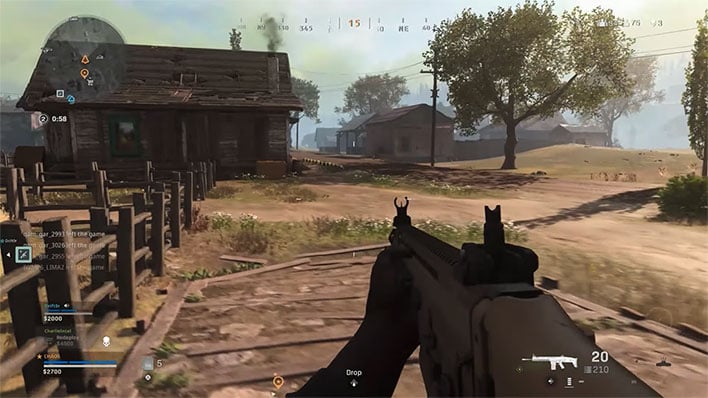 Before it went down, however, the folks at Arstechnica grabbed some screenshots. Full details will have to wait, though the video did offer up some information on the free-to-play battle royale mode. It seems that owners of the Modern Warfare reboot will get early access to Warzone, and/or special items not available to other players.
The video did not highlight the precise size of the map. However, one of the zoomed-out views made it look really big. That's not surprising—previous leaks have pegged Warzone as supporting up to 150 players rather than 'just' 100 players, as is more common in the battle royale genre. We also know there will be some gruesome finishing moves on downed enemies.

Ground transportation vehicles will be present in Warzone, including tanks and trucks. In addition, the video showed a "gulag" mode that will let players break out of prison as a sort of fresh take on respawning. After a player dies for the first time in Warzone, they wake up in prison perched on a balcony. Down below, two players are in a fight to the death. The one who wins gets to rejoin their team on the battlefield.
It's still not clear when Warzone will release, but it can't be too far out at this point.
Images Source: Chaos (via Activision)