Call Of Duty: Vanguard Swings Back To WWII This November, Watch The Reveal Trailer

Maybe now Activision's legal team can take a chill pill and stop sending out DMCA take down notices for leaks pertaining to Call of Duty: Vanguard. There is no reason to protect the artwork anymore, because on the heels of releasing a Vanguard teaser trailer earlier this week, Activision has followed that up with an official announcement and a nearly three-minute reveal trailer.
As was rumored to be the case, Call of Duty: Vanguard once again returns players to a World War II setting (well, a post WWII setting), this time to "witness the origins of Special Forces as you play a pivotal role and change the face of history." Though the WWII setting is a familiar one in the CoD franchise, lead developer Sledgehammer Games is hoping to shake things up.
Here's a look at the reveal trailer...

The single-player campaign spans four major theaters of war. Following the death of Hitler, the story focuses on a fictional attempt find a successor as part of "Project Phoenix." There are four characters whose stories are intertwined, with conflicts taking place across the Eastern and Western Fronts of Europe, and North Africa.
"Whether dogfighting over the Midway Islands, defending Stalingrad with a sniper’s precision, airdropping over France, or blasting through advancing forces in North Africa, this is a deeply engaging and raw campaign, with the signature combat you’ve come to expect from Call of Duty. Test your mettle across beautiful but battle-scarred war fronts as hope strives to triumph over conflict," Activision explains. 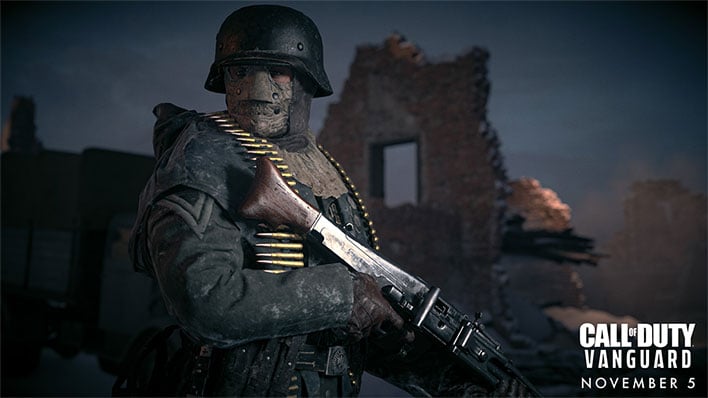 Of course, there will also be a multiplayer component, featuring a "massive day one multiplayer offering" comprised of 20 maps at launch, 16 of which have been built for core gameplay. Activision is promising diverse environments and lots of "adrenaline-fueled" action, as one might expect. It also says to expect more innovative ways to play.
"These include an advanced Gunsmith and Caliber system that brings immersive and reactive environments to a new level, and the next generation of the seminal 2v2 Gunfight mode first introduced in Modern Warfare; Champion Hill. Imagine quick-action, close-quarters, small-squad combat in which eight teams compete in a series of head-to-head matchups where the last team standing wins," Activision explains.
In a blog post detailing Call of Duty: Vanguard's details, Activision also talked about a franchise-first crossover featuring an all-new Zombies game mode, led by Treyarch Studios. This will be a cooperative experience that meshes the Dark Aether story, with "deeply engaging lore, all while innovating on the core gameplay that the mode is famous for." So that should be interesting.
Call of Duty: Vanguard drops on November 5, 2021. It is available to preorder now, and those who do will get early access to the open beta, starting on the PlayStation 5 and 4. Those who preorder also instantly get a Night Raid Mastercraft in Black Ops Cold War and Warzone.