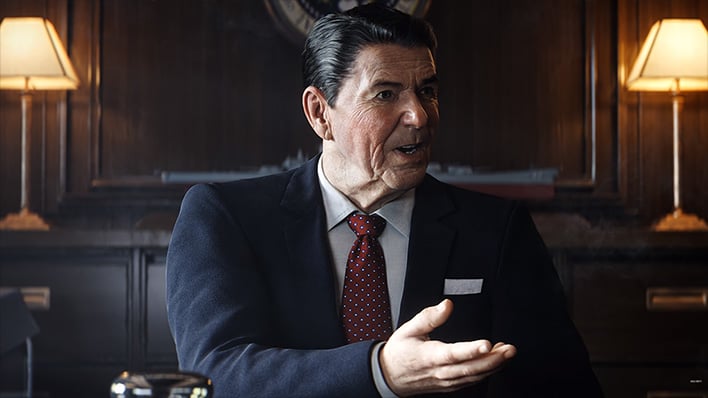 Ronald Reagan is president, tensions with the Soviet Union are uncomfortably high, and the global population at large is threatened by the reality that a nuclear war could break out at any moment. The world has already lived through this scenario, and it is happening once again, though thankfully this time it is just the setting for Call of Duty: Black Ops Cold War, which launches in a few months.
Raven Software is working on the game's immersive single-player campaign, while Treyarch is handling the multiplayer experience. Ahead of the game's release, publisher Activision shared the first cinematic trailer, and it is certainly gripping. Have a look (you can watch in up to 4K)...
"Taking place after the events of the original story, Black Ops Cold War reunites players with legendary operatives Alex Mason, Frank Woods, and Jason Hudson as they’re pulled into a high-stakes conspiracy. Joined by a new cast of characters and faced with threats from the past, players will uncover a subversive plot with devastating global implications," Activision explains.
in the single-player campaign, players will have access to an "array of badass munitions," including both classic firearms and prototype weapons from the early 1980s. It is set in 1981, with President Reagan authorizing a covert mission to pursue Perseus, a Soviet spy. Perseus is based on a real life character, and there is plenty of information on the web if care you dive into the actual historical events.
Cross-play and cross-generation are both part of the package. And on the multiplayer side, we'll have to wait a bit longer for more details—Activision is planning an extensive reveal on September 9. All we really know right now is that Treyarch's signature Zombies co-operative experience will be making a return.

Call of Duty: Black Ops Cold War is set to arrive on November 13. It is available to pre-order now on PlayStation 4, Xbox One, and PC (via Battle.net). There are three editions...
Here is what's included with each version...

The above represents the PlayStation 4 and PlayStation 5 versions. However, the pricing and features works out the same for the Xbox One and Xbox One Series X, meaning you need to shell out $89.99 if you want to play on your current-generation console, and have access to updated graphics and features on a next-gen console. On the PC, users can choose between the Standard Edition and Ultimate Edition.
Console players who opt for the Standard Edition can still play the game on a next-gen console via backwards compatibility, and can take their profiles and stats with them. But it might be worth spending the extra $10 for the cross-gen version, assuming it arrives with access to upgraded visuals and SSD optimizations.
In any event, this looks to be the way of things going forward—some games on the Xbox Series X and PlayStation 5 will cost $10 more than they do on the Xbox One and PlayStation 4. In addition to Call of Duty: Black Ops Cold War going that route, so will NBA 2K21.