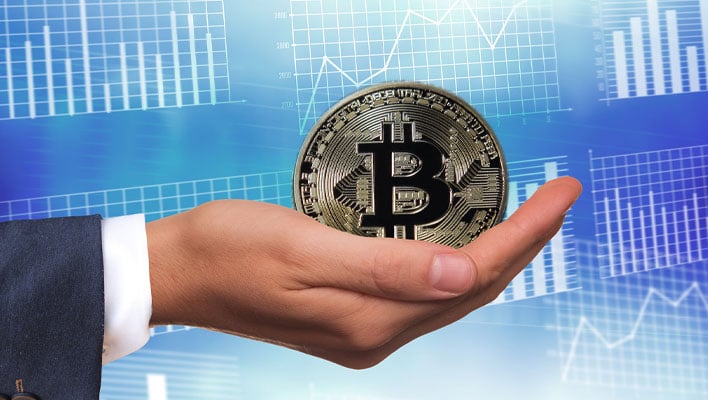 Bitcoin is still on the rise, having yet again hit a new record high, this time topping $50,000 for the first time ever. It achieved the milestone yesterday morning, before dropping back below the threshold—at the time of this writing, it is trading for a few hundred bucks above $48,000, giving Bitcoin a market cap of over $902 billion.
The more Bitcoin climbs, the more attention it garners from investors, despite remaining a highly volatile currency. That applies to cryptocurrency in general, though Bitcoin leads the pack, and has proven to be the most stable of the bunch in the long term (so far, anyway). Of course, things can change in an instant, but consider this—if you had purchased $1,000 worth of Bitcoin five years ago, it would be worth around $125,000 today.
Do you really want to make your eyes spin? Consider that if you purchased $1,000 worth of Bitcoin in 2010, when it peaked at $0.39, it would be worth more than $128 million today. Anyone have a time machine I can borrow? 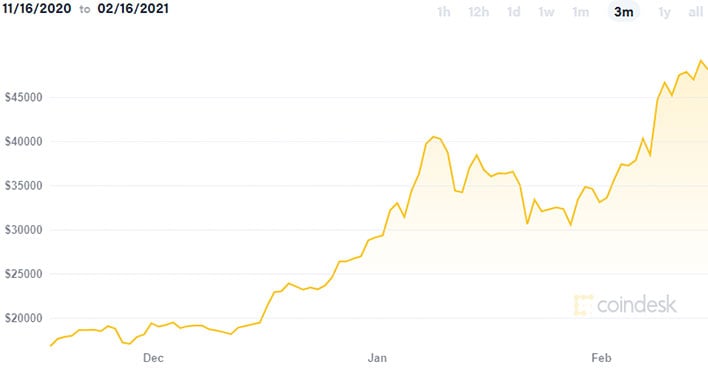 Bitcoin has more than doubled in value over the past two months alone. And in the past 24 hours, it peaked at $50,584.85, the highest it has ever been. Even though it is now down a couple grand, it is entirely within the realm of possibility that it will far surpass that mark in the coming weeks and months.
That is not investing advice, mind you (we don't give that around here, and caution you to speak with a financial advisor before making any such decisions). However, there have been some interesting trends in the past few months. It started when PayPal began accepting cryptocurrency payments, which gave Bitcoin some added legitimacy.
More recently, Tesla poured $1.5 billion into Bitcoin and announced plans to accept cryptocurrency for EV purchases, then Mastercard punched its ticket aboard the crypto-train, saying it too was in the process of welcoming digital currencies into the fold.
"Our philosophy on cryptocurrencies is straightforward: It’s about choice. Mastercard isn’t here to recommend you start using cryptocurrencies. But we are here to enable customers, merchants and businesses to move digital value—traditional or crypto—however they want. It should be your choice, it’s your money," Mastercard stated in a blog post.
These developments have no doubt inspired confidence in Bitcoin among some people, leading to continued record highs. Whether it pans out in the long run remains to be seen, but from the outside looking in, it sure is interesting to watch.