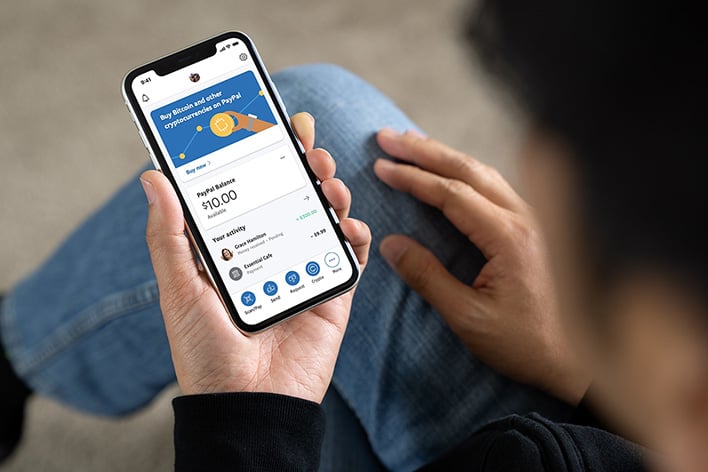 Remember when you could not find a mid-range or high-end graphics card to save your life, because the cryptocurrency miners were hogging them all? Things changed when mining in large part shifted from GPUs to specialized ASIC hardware, the cryptocurrency boom came to an end. Well, sort of. Bitcoin has held strong, and it also just got a boost from PayPay, which announced it will be accepting cryptocurrency payments in the near future. Wild times, folks.
It is an interesting move, in part because cryptocurrency mining and trading has not exactly been a mainstream topic this past year. PayPal seems to be showing up late to the party, but is evidently confident that the crypto scene has legs, particularly during the Coronavirus pandemic we find ourselves dealing with at the moment.
From PayPal's perspective, digital currencies are a foregone conclusion. Here is the statement PayPal CEO and president Dan Schulman issued on the topic...

The shift to digital forms of currencies is inevitable, bringing with it clear advantages in terms of financial inclusion and access; efficiency, speed and resilience of the payments system; and the ability for governments to disburse funds to citizens quickly. Our global reach, digital payments expertise, two-sided network, and rigorous security and compliance controls provide us with the opportunity, and the responsibility, to help facilitate the understanding, redemption and interoperability of these new instruments of exchange. We are eager to work with central banks and regulators around the world to offer our support, and to meaningfully contribute to shaping the role that digital currencies will play in the future of global finance and commerce.

As such, PayPal is launching a new service that enables customers to buy, hold, and sell cryptocurrency directly from their PayPal accounts. It also plans to "significantly increase cryptocurrency's utility by making it available as a funding source for purchases at its 26 million merchants worldwide."
It is a major play, one that will require a broader understanding of digital currencies by the public at large. To kick things off, PayPal will support a handful of cryptocurrencies, including Bitcoin, Ethereum, Bitcoin Cash, and Litecoin, all of which can be managed within a user's PayPal digital wallet.
PayPal also boasted that it has been issued a first-of-its-kind conditional Bitlicense by the New York Statement Department of Financial Services (NYDFS).
"NYDFS' approval today follows our June 2020 announcement for a new framework for a conditional Bitlicense to encourage, promote, and assist interested institutions to have a well-regulated way to access the New York virtual currency marketplace in a way that is both timely and protective of New York consumers, through partnerships with New York authorized virtual currency firms," said Linda A. Lacewell, superintendent, NYDFS.

News of PayPal's move sent Bitcoin's price on a surge, to over $12,800 currently. That is the highest it has been since early 2018. And at the beginning of September of this year, Bitcoin was just a bit over $10,000.