With all due apologies for the disappointing news, you did not win a set of Apple AirPods, no matter what that unsolicited text message you received may have said. The text message is a scam attempt, plain and simple. It has gotten so big that the Better Business Bureau (BBB) felt it necessary to issue a warning to the public, explaining how the text message con works.
Tech savvy individuals (most of you reading this) will recognize this sort of thing right away. But even if you would never fall for such a thing, you can probably think of family members and friends who would. So if nothing else, pass the warning on to those you know who would be duped by what basically amounts to a popular phishing scam, via text.
How it works is, potential victims receive a congratulatory text message purporting to come from Amazon, saying they have won a set of Apple AirPods, or an Apple Watch, or some other valuable and popular item. I've seen this circulating on Facebook, and have even received one of these scam messages myself very recently. It looks something like this... 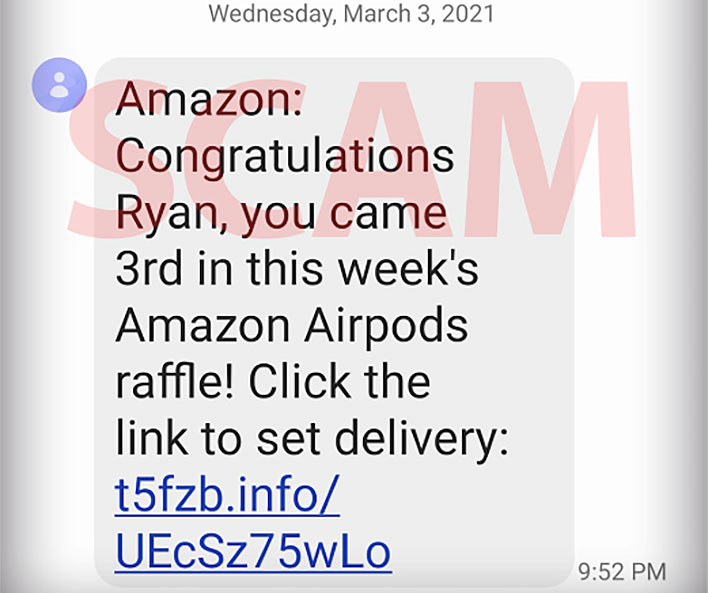 As the BBB emphatically warns, "Don't click!" Even if the string of text in the URL is not a random set of characters, but appears to direct you to Amazon, still don't click (or tap) on it. There is no raffle going on, and you stand to lose more than whatever it is the scammer claimed you won.
"The text message is not from Amazon and it is the latest in a long list of impersonation scams that have been happening since the start of the pandemic, often using Amazon’s brand. The bogus raffle and suspicious link are part of a con used to trick people into visiting a phishing website, where they unwittingly share account credentials as well as personal and financial information with fraudsters," the BBB explains.
Cyber con artists seem to be kicking this scam into high gear in recent weeks, or maybe it is just getting more attention on social media. Either way, don't fall for it. The BBB says in 2020 it received 771 reports of scams impersonating Amazon, noting it was the second-most impersonated brand behind the Social Security Administration.
There are others brands to look out for, though, including Netflix. When in doubt, contact the company directly by looking up its information online, and call or email customer service. And if you do suspect the text message is fraudulent, just delete it and/or block the number—avoid the temptation to text "Stop" or "No," as that only lets the scammer know the phone number is active.