Battlefield 4 Is Now Free To Claim For Amazon Prime Subscribers, Grab It ASAP!

We imagine this is the time of the year that Amazon really bolsters its Prime membership numbers, with people signing up in anticipation of its annual Prime Day event. To that end, Amazon Prime Day 2021 is right around the corner (it takes place June 21-22). Ahead the event, however, Amazon is serving up another treat for Prime members—a free copy of Battlefield 4 for PC.
Claiming your copy is rather easy. Just head over to Amazon's Battlefield 4 promotion page, click the Claim Now button, and then grab (copy) the key and redeem it on your Origin account. You will be prompted to sign into your Amazon Prime account when you attempt to do this, if you are not already. And if you are not a Prime member, you will need to become one.
If you are brand new to Prime, you can sign up for a 30-day free trial. That gives you enough time to both claim your copy of Battlefield 4 and take advantage of the upcoming Prime Day sales bonanza, before being on the hook for a subscription fee (and of course you can cancel your membership before the trial ends, to avoid being charged). 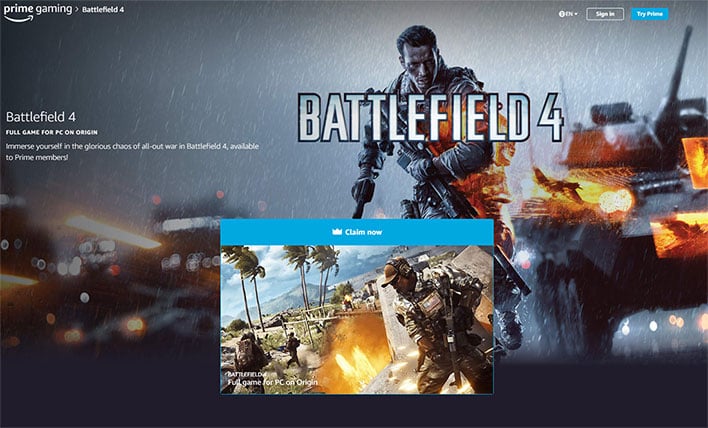 Amazon Prime members can claim Battlefield 4 for free until June 21, 2021

For most people, Amazon Prime runs $12.99 per month, or $119 per year. Technically, this free game promo is part of Prime Gaming, previously known as Twitch Prime, which is included as part of a Prime membership. Prime Gaming has its own set of perks, such as a monthly sub to a partner or affiliate channel, access to select games and in-game loot at no extra cost, extended broadcast storage, and a few others benefits.
We say "most people" pay $12.99 per month or $119 per year, because there is also a reduced Prime Student membership. Students can sign up for a six-month trial, and then pay just $6.49 per monthly. Qualifying EBT and government assistant recipients can get a reduced rate as well ($5.99 per month, for up to four years).
As for Battlefield 4, the first-person shooter arrived in late 2013 and is still well-regarded by gamers. Over on Steam, it maintains an 'Very Positive' rating (all reviews and just the recent ones). You can check out our Battlefield 4 gameplay and performance review for our own thoughts.
The freebie arrives ahead of EA's Battlefield 6 reveal, which is scheduled for June 6. It is a bit odd that Amazon and EA passed on offering Battlefield V for free in favor the nearly eight-year-old predecessor, but the reception on the newer game was not as good as it was for Battlefield 4. So perhaps the thinking is, offer a better received title that still holds up, in hopes of drumming up excitement for Battlefield 6.
If you plan on claiming Battlefield 4 (Standard Edition), don't dawdle. Amazon is gifting codes up until June 21, which can be claimed on Origin until July 21, 2021.