ASRock isn't waiting around for Intel's 13th Gen Raptor Lake processors to arrive before updating its existing motherboards to support the next-gen chips. The company has already made available BIOS updates for dozens of 600-series motherboards spanning the boards based on Z690 all the way down to H610.
We still don't have a release date for Raptor Lake, but assuming no last-mile snags, it will debut before the end of the year. It will also be drop-in compatible with existing 600-series motherboards rather than requiring a new socket. We fully expect Intel to trumpet a new round of 700-series chipsets when Rocket Lake arrives, but with a BIOS update, existing owners of socket LGA 1700 motherboards should be able to run Intel's next-gen CPUs.
Lest there be any doubt, ASRock has made available a whole bunch of BIOS updates that offer "support for next generation Intel processors," which is in obvious reference to Raptor Lake. Here's a look at all the models... 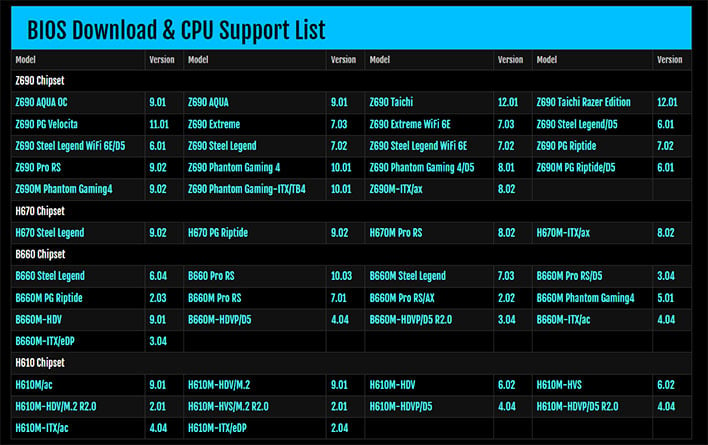 By our count, that's 46 motherboards that are prepped and primed for Raptor Lake with a BIOS update. These don't look to be beta BIOS updates either, but stable releases (at for the handful that we checked). Updating the BIOS is pretty painless, too, though be sure to back up your settings and data (in case anything does happen to go wrong).
"ASRock has been completely dedicated to EZ update/setting. As the first generation of LGA1700 socket motherboards, most of ASRock Intel 600 series motherboards are equipped with BIOS flashback button that allow users to update BIOS with USB Flash Drive easily," ASRock explains.

"Furthermore, ASRock add Auto Driver Installer(ADI) to the newest BIOS of all Intel 600 series motherboards. ADI ensures the ability of Ethernet connection and provides a convenient way to install all drivers needed without any annoying application lifted in your OS. That is to say, no need to worry about not having the CD ROM for support CD, and you could set the system just in a blink," ASRock adds.
Intel has confirmed that Raptor Lake will scale to 24 cores and 32 threads, whereas Alder Lake maxes out at 16 cores and 24 threads. Those additional cores on Raptor Lake come on the E-core side, with top configurations offering 8 P-cores and 16 E-cores, the former of which support Hyper Threading.
During its Investor Meeting earlier this year, Intel said Raptor Lake will up to a double-digit performance increase over Alder Lake. It also teased "enhanced overclocking features," and said its next-gen silicon will ship sometime in the second half of 2022.
Then sometime in 2023, Intel will pivot to Meteor Lake (Intel 4 node) with a new flexible tiled architecture and integrated AI acceleration, followed by Arrow Lake (Intel 20A) in 2024, and then Lunar Lake ((Intel 18A).