Every passing day seems to bring with it a new graphics card rumor, and given that NVIDIA recently added an upgraded GeForce RTX 3080 with more memory and CUDA cores to the mix, it's worth paying attention to the leaks. And what do those leaks tell us now? That NVIDIA is likely to upgrade its GeForce RTX 3070 Ti as well.
This is not the first we're hearing of this, by the way. Last October, it was rumored NVIDIA would unveil a beefier GeForce RTX 3070 Ti with 16GB of GDDR6X in January. Then in December, Gigabyte listed a bunch of SKUs with the Eurasian Economic Commission, seemingly confirming those plans. It had also registered a bunch of GeForce RTX 3080 12GB models before the upgraded SKU was officially announced.
Fast forward to today and Gigabyte has added more custom models, suggesting a GeForce RTX 3070 Ti with 16GB of GDDR6X is still in the cards. In addition, ASUS has registered a bunch of custom models as well.
Here's a look at the updated Gigabyte listing... 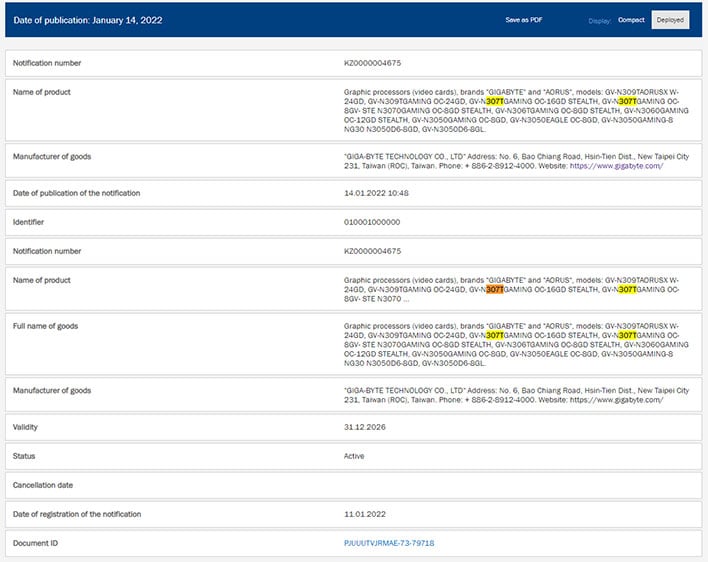 The latest listing from Gigabyte highlights some new Gaming Stealth OC models that will join half a dozen other custom cards. We don't get a glimpse of the core specs, other than the "16GD" denoting 16GB of GDDR6X memory.
Here's the ASUS listing... 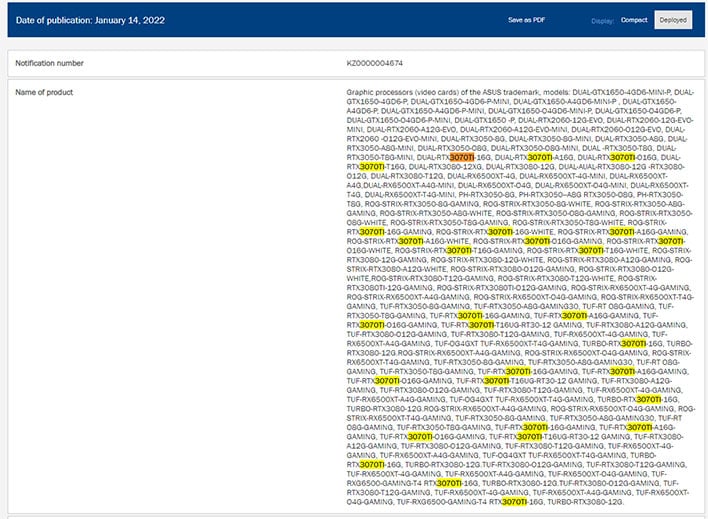 This one is a bit messier to navigate, but we can make out several custom SKUs, including models within the company's Dual, ROG Strix, TUF Gaming, and Turbo categories. Likewise, the registrations indicate 16GB of GDDR6X memory.
For reference, the regular GeForce RTX 3070 Ti sports 6,144 CUDA cores, 192 Tensor cores, 48 RT cores, 192 texture units, 96 ROPs, and 8GB of GDDR6X memory on a 256-bit bus for 608GB/s of memory bandwidth. Reference GPU clocks are set at 1,575MHz (base) and 1,770MHz (boost).
It will be interesting to see if the upgraded GeForce RTX 3070 Ti offers anything more than a doubling of memory. The newer GeForce RTX 3080 not only increased its memory allotment, but also widened the memory bus and added more CUDA cores.