NVIDIA might be getting ready to release a new flagship graphics card based on its current generation Ampere GPU architecture. That distinction currently belongs to the GeForce RTX 3090 we reviewed last year, which is essentially this generation's Titan card. However, rumors have been swirling of a Super refresh to the GeForce RTX 30 series, including the 3090. The latest unofficial chatter is that it will manifest in January 2022.

This is not the first we've heard about an upgraded GeForce RTX 3090. Based on past rumors, the Super variant would see a bump to a full-fat GA102 GPU with 10,752 CUDA cores, compared to 10,496 CUDA cores on the existing regular model. It has also been reported that NVIDiA would crank the power dial to 400W, up from 350W.
That suggests the GeForce RTX 3090 Super would likely feature faster base and boost clocks. As it stands, the regular 3090 checks in at 1,395MHz for the base clock and 1,659MHz for the boost clock. It also wields 24GB of GDDR6X memory (19.5Gbps) linked to a 384-bit bus, for 936GB/s of memory bandwidth.
There are other possible changes a Super model could bring, if and when it materializes. And according to Twitter user @hongxing2020, it is for real. 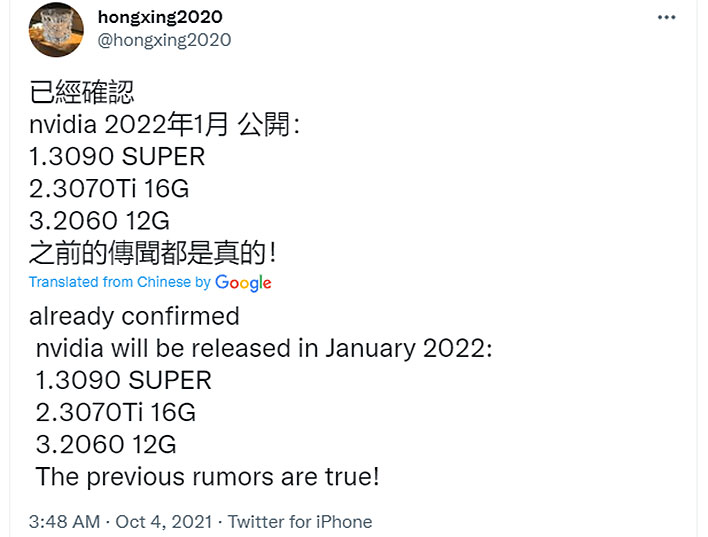 The supposed leaker doesn't have a long track record on Twitter, but according to their latest tweet, a GeForce RTX 3090 Super is "confirmed" to launch in a few months. Same goes for a GeForce RTX 3070 Ti model with 16GB of memory, and a GeForce RTX 2060 refresh with 12GB of memory, both of which have also been previously rumored to some extent.

Adding Super and upgraded Ti models to the mix at the same time could make things unnecessarily convoluted to the casual observer. This is especially true of the GeForce RTX 3070 Ti, which already exists. But supposedly NVIDIA is prepping a follow-up model with twice as much memory (16GB versus 8GB).
Of course, only NVIDIA knows for sure what the future holds, and even then, specs can and have changed at the final hour. So we'll have to wait and see what Jensen Huang and the gang truly have up their sleeves.
A lot of this academic for the time being, anyway. NVIDIA could launch 100 new models, and they still would all be in short supply. That's just the reality of the situation right now—barring the occasional Founders Edition drop by Best Buy, which attracts crazy long lines and people camping out, GPUs of all shapes and sizes and extremely hard to find in stock. Here's hoping things begin to settle down in 2022.