The Galactic Center (GC) region of the Milky Way galaxy contains a supermassive black hole called, Sagittarius A, along with other types of particle accelerators and supernova remnants. It is here where astronomers and scientists found a new structure extending north and south of the galactic center.

NASA and others have been scouring our galaxy and beyond for decades in search of new celestial bodies. With each new discovery, more questions also arise of course. A team of researchers from the Chinese Academy of Sciences in Nanjing have been studying a map of radioactive gamma-rays that exist in and around the center of our galaxy. Their findings seem to indicate that there is something near the center of the galaxy creating an abundance of cosmic rays and gamma-rays just outside of the galactic center.

Gamma-rays are the highest-energy form of light in the universe and come about when high-speed particles called cosmic rays slam into ordinary matter. The team from China found that there is something preventing a large number of cosmic rays from entering from other parts of the universe. They describe this effect as an "invisible barrier" that wraps around the center and is causing the density of cosmic rays to be far less than the rest of our galaxy. It seems cosmic rays are welcome to leave, but are having a hard time gaining entry. The image below of giant gamma-ray bubbles emitting from the center of the galaxy comes from a study done by NASA researcher Doug Finkbeiner back in 2010. 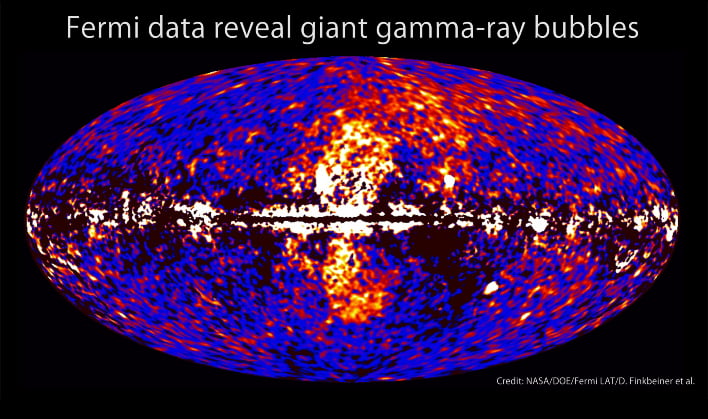 The galactic center of the Milky Way is about 26,000 light-years from Earth and located in the constellation Sagittarius. This locale is the home to more than 1 million times as many stars per cubic light-year as the rest of the solar system combined. It is all wrapped around a supermassive black hole known as Sagittarius A, which has a mass 4 million times that of the sun.

For quite some time scientists have thought Sagittarius A, or another object in the same area, has been creating cosmic rays that emit throughout the galaxy. As these rays move through the magnetic fields of our galaxy, they create what is referred to as the cosmic ray sea. or an ocean of high-energy particles that is roughly the same density throughout the Milky Way.

By utilizing data from Fermi Large Area Telescope (LAT, researchers confirmed that there is something located in the galactic center acting as an extremely large particle accelerator. They theorize that possibilities could include Sagittarius A, or even strong stellar winds that arise from the large number of stars crammed into the galactic center.

The barrier that was discovered is proving much harder to pinpoint its origin. Some have suggested that it may involve the jumble of magnetic fields near the dense core of our galaxy. Research is ongoing and, as more is discovered, it will either aid in uncovering the beginning of this invisible barrier, or simply spur more questions that need to be answered. At this juncture, how this barrier originated and how it works remains a mystery. If you want to read more in depth information regarding the research, you can visit Nature Communications as well.

Regardless of the outcome of this new finding, each discovery will only keep us searching for more information about the awe-inspiring new frontier of space, matter, antimatter and time.