ASRock has officially extended its reach into gaming monitor territory with the launch of two models, as was tipped earlier this summer. They include the 34-inch Phantom Gaming PG34WQ15R2B with a curved Vertical Alignment (VA) display, and a smaller 27-inch Phantom Gaming PG27FF1A built around a flat In-Plane Switching (IPS) panel. Both offer a well-rounded set of specifications, especially given that this is new ground for ASRock, and a unique feature that sets them apart from the competition.
That feature is an integrated Wi-Fi antenna. ASRock says these are the world's first models to offer such an amenity, and as far as we're aware that's true. Why offer such a thing, though? ASRock basically says it comes down to cable management and a better signal. 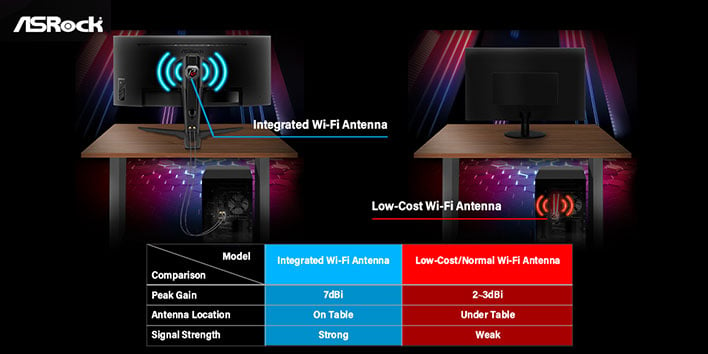 "By connecting the built-in Wi-Fi antennas to PC, the Wi-Fi signal won't be masked by the desk. Moreover, the antenna offers 7dBi peak gain that improves PC's Wi-Fi signal and helps gamers to enjoy fluid gameplay without latency," ASRock says.
Nothing beats a wired connect, naturally, but that's not always a feasible option. As such, we won't begrudge the inclusion of a Wi-Fi antenna so long as it doesn't balloon the price tag—more on that later. 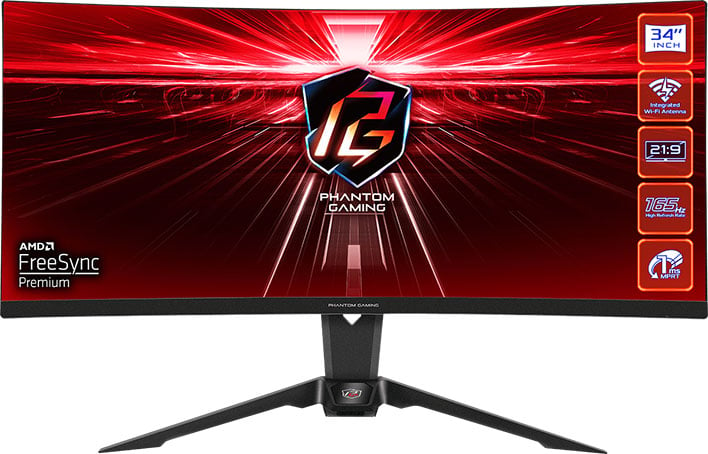 ASRock's 34-inch Phantom Gaming PG34WQ15R2B sports a 34-inch VA screen with a 3440x1440 resolution, 1500R curvature, 165Hz refresh rate, and 1ms response time (MPRT). ASRock says it serves up 91% of the DCI-P3 color space and 115% of sRGB. These stats are generally indicative of high image quality, but do not guarantee color accuracy—you'll want a calibrator like the SpyderX Pro for that with any panel you get.
This is a FreeSync Premium model, so it can sync the refresh rate of the display to your Radeon GPU. It also boasts HDR support with a DisplayHDR 400 badge. It's not clear where the peak brightness lies, though ASRock's spec sheet lists a typical brightness level of 550 nits. When it comes to LCD displays, higher brightness levels make a difference for HDR content and ideally you want to be in the eye-searing 1,000 nits range.
You'll find a pair of built-in 2W speakers, along with a dual HDMI 2.0 inputs, a DisplayPort 1.4 connector, and a 3.5mm headphone jack. As for ergonomics, you can make tilt, swivel, and adjust the height.
We're not seeing this listed on Amazon, though you can find the PG34WQ15R2B for $429.99 on Newegg. That's a competitive price for a name brand monitor. To put it into perspective, the ASUS TUF Gaming VG34VQL1B offers similar specs and is on sale for $476.99 at Newegg (and $517.99 on Amazon). 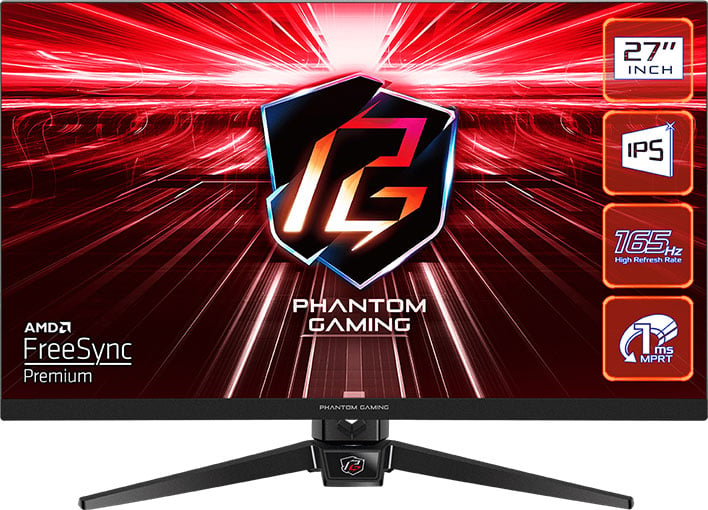 The 27-inch Phantom Gaming PG27FF1A, meanwhile, boasts an IPS screen with a 1920x1080 resolution while offering the same 165Hz refresh rate and 1ms response time (also MPRT). Professional gamers would probably like to see an even higher refresh rate, but those typically come at a hefty pricing premium.
This is also a FreeSync Premium model. It supports HDR as well (HDR10), though it doesn't get as bright—it's listed at 250 nits and lacks DisplayHDR 400 certification.
Inputs include a DisplayPort 1.2 connector, two HDMI 2.0 ports, and a 3.5mm headphone jack. It also features a pair of 2W speakers, along with the ability to make tilt and swivel adjustments, but the height is fixed.
You can find the PG27FF1A for $189.99 on Newegg. That's also fairly competitive, though you can find similar specs for a little less if you hunt around.