ASRock makes a fair number of products, including motherboards and graphics cards, but unlike some of its rivals it has yet to release any gaming monitors (or even non-gaming displays). It's an area that ASUS, Gigabyte, and MSI all compete in, but not ASRock. It looks like that's going to change very soon, though, with a line of presumed Phantom Gaming monitors showing up in the Korea Communications Commission (KCC) database.
The KCC is modeled after the Federal Communications Commission (FCC) in the United States and serves the same general purpose, but for South Korea. So any entries in the KCC database can be viewed as more reliable than a random leak or rumor.
So what are we looking at? As spotted by Twitter user @momomo_us, ASRock submitted a handful of models to the KCC and also a couple of other agencies, including the Digital Content Protection (DCP) website and the DisplayPort organization's website. 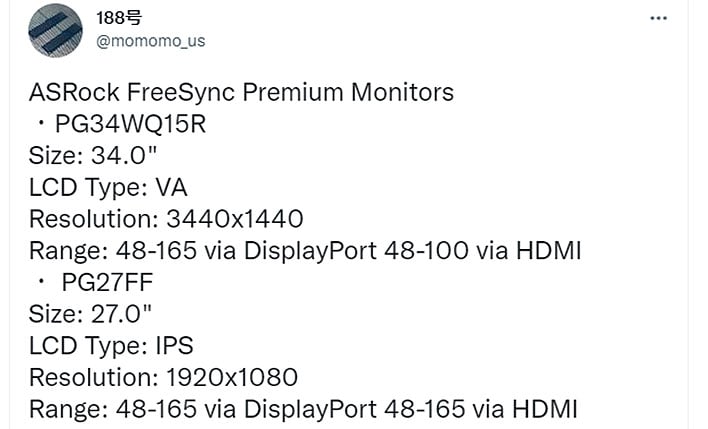 The apparent flagship of the bunch is the PG34WQ15R, which sports a 34-inch curved VA panel with a 3440x1440 resolution. This is a FreeSync Premium monitor with a refresh rate of 48-165Hz over DisplayPort, and 48-100Hz over HDMI. That suggests it's probably not an HDMI 2.1 model, though that would be a bigger deal if Acer was taking aim at console gamers. That's just a guess anyway.
Base specifications also exist for the PG27FF. This one is a 27-inch display rocking an IPS panel with a 1920x1080 resolution and 48-165Hz refresh over both DisplayPort and HDMI. It's listed as a FreeSync Premium monitor as well.
It appears there are various iterations of this one, including the PG27F15R, PG27FF1A, and PG27F15R2A. It's not clear how they all differ, though.
Finally, there are references to a PG42U, PG32QF, and PG27Q15R. Going by the model designations, the PG42U is probably a 42-inch display with a 4K resolution, the PG32QF is likely a 32-inch monitor with a 1440p (QHD) resolution, and the PG27Q15R could be a 27-inch 1440p display. None of that is confirmed, we're just extrapolating from the model numbers.
Speaking of, the model numbers could create some confusion in the market if they stand. That's because ASUS also uses "PG" in several of its monitors, like the PG27UQ we reviewed a few years ago. It also makes sense from ASRock's perspective, though, as we suspect these will fall under its Phantom Gaming branding.