Arm today announced several new GPUs and CPUs with upgraded specifications and features. The overarching goals of these latest additions to Arm's product stack is to optimize visual experiences and supercharge mobile experiences, as part of what the company is billing as a Total Compute Solutions portfolio.
In some respects, this is a branding play. The Total Compute Solutions portfolio encompasses Arm's complete line of hardware designed to "address every level of performance, efficiency, and scalability for specialized processing across all consumer device markets." That's the kind of thing investors like to hear, but underneath the corporate speak are a handful of intriguing updates to Arm's mobile silicon IP. 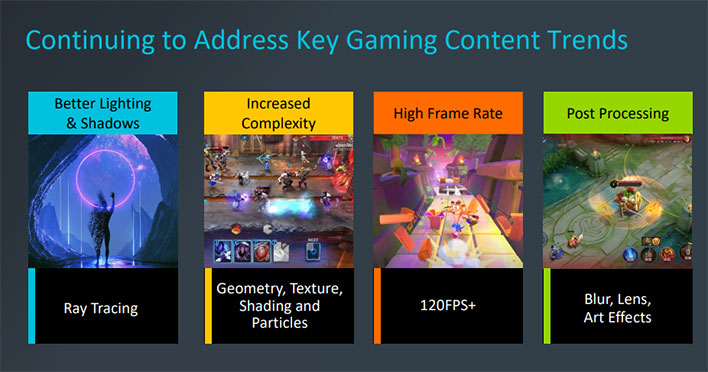 For gamers, the most interesting addition is the Immortalis-G715, a brand new flagship GPU "built on the heritage of Mali." This is arguably the most exciting of today's announcements too, because it's the first Arm GPU with hardware-based ray tracing support.
There's been a major push to deliver ray-traced visuals in PC and console gaming, with modern GPUs employing dedicated hardware to process a more intensive rendering technique (compared to rasterized rendering). Ray tracing has the potential to create increasingly realistic looking scenes by accurately tracing how light bounces and reflects off surfaces and objects.
It's much more demanding on hardware, though, which is why ray tracing only relatively recently has found its way to PC and console gaming (today's implementations are actually a mix of rasterized and ray-traced rendering, furthered aided by upscaling techniques like DLSS and FSR). Well, your next premium smartphone might have that capability as well. 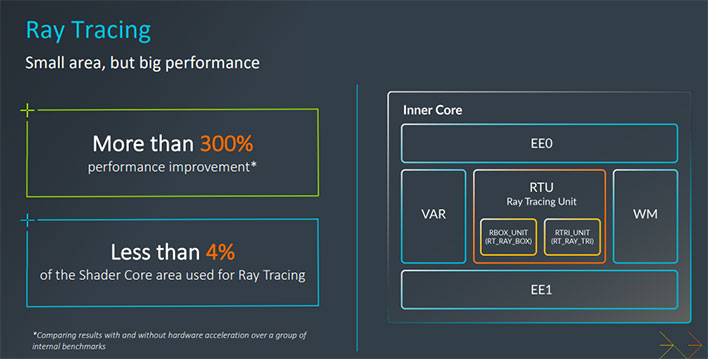 According to Arm, injecting ray-traced hardware into its modules only takes up less than 4 percent of the share core area. At the same time, this nominal cost delivers a greater than 300 percent performance improvement through hardware acceleration.
"Arm believes that ray tracing represents a paradigm shift in mobile gaming content. We decided to introduce hardware-based ray tracing support now on Immortalis-G715 because our partners are ready, the hardware is ready, and the developer ecosystem is (about to get) ready," Arm says.
Here are a couple of demos of what it looks like on mobile...


So when might you see this kind of fidelity upgrade in mobile gaming experiences? The immortalis-G715 will find its way to flagship smartphones early next year. That's just the hardware side of the equation, though. On the software side, Arm notes it doesn't have have any clear commitments from game developers, at least not yet. We'll see how quickly that changes as more handsets emerge with ray tracing capabilities. 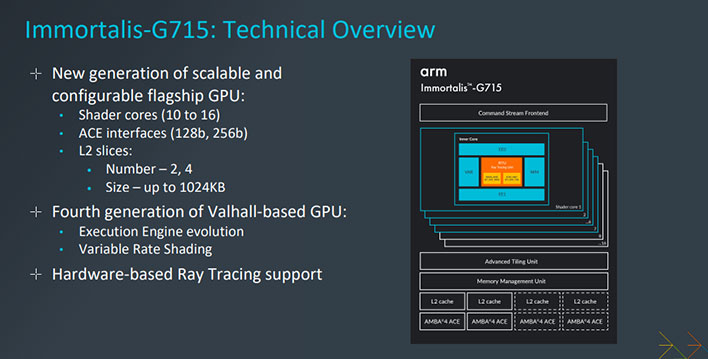 Other features of the Immortalis-G715 include between 10 and 16 cores, two or four L2 cache slices (up to 1,024kb), and support for variable rate shading (VRS). According to Arm, this all translates to up to 40 percent better real-world gaming performance, better power efficiency (up to 15 percent), and a huge 2X uplift in machine learning performance.
Arm also announced two other GPUs, the Mali-G715 and Mali-G615... 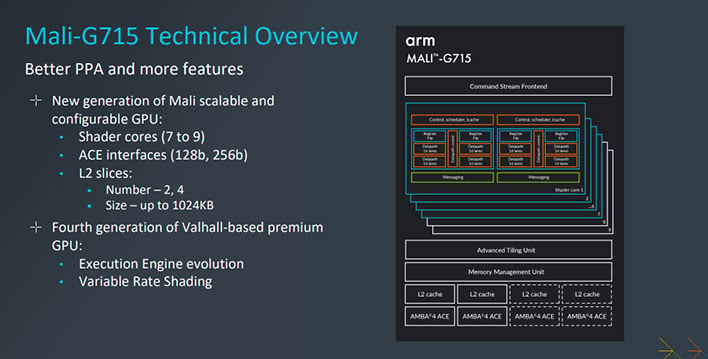 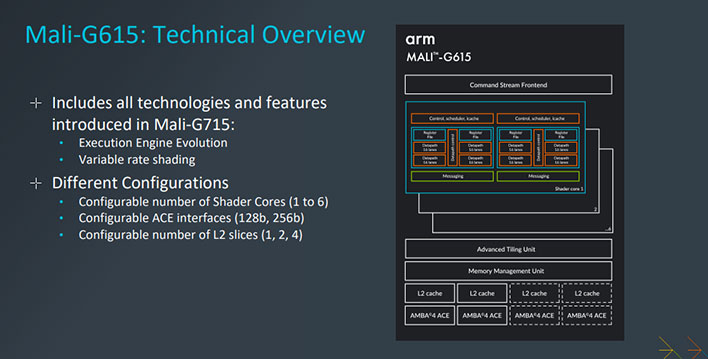 You can see a high level overview of the technical specifications above, but what it all boils down to is faster performance combined with enhanced capabilities. Both GPUs also employ variable rate shading support to deliver both "significant energy savings" and a sizable performance boosts.
"Essentially, it takes a scene and focuses the rendering on the parts that need it at a fine pixel granularity. Typically, this would be where the game action takes place. Areas that require less focus, such as background scenery, are rendered with a more coarse pixel granularity. The gaming scene would still maintain its perceived visual quality," Arm explains.
Arm says these GPUs are its most performant to date, and because of the power savings, it's also claiming more game time on the go.
You can check out more details in Arm's GPU blog.

While we're most excited about Arm's new GPUs, and especially the Immortalis-G715, it's also rolling out a couple of upgraded CPUs based on its still-relatively-new Armv9 architecture (introduced last year). The new CPUs are designed to push peak performance even further. 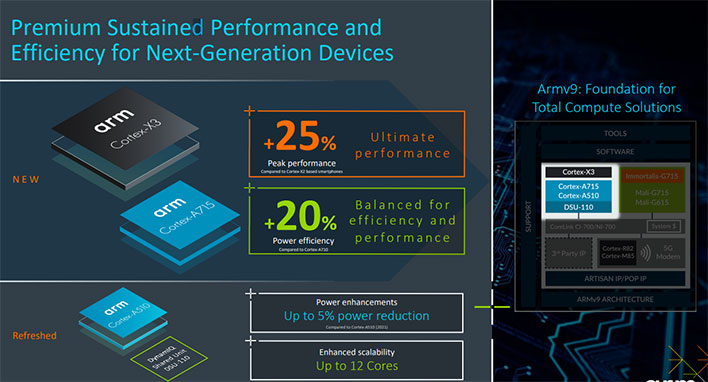 The top model is the Cortex-X3. This is Arm's third-generation Cortex-X CPU, and the second generation of Armv9 silicon. As with past iterations, it's designed for ultimate performance. Arm is claiming another double-digit IPC gain (for the third consecutive year), with up to 34 percent better single-threaded performance when compared with the latest mainstream laptops.
Compared to the latest Android smartphones, Arm says its Cortex-A3 delivers up to 25 percent better peak performance, and 20 percent improved power efficiency. There are a number of under-the-hood changes that prop up these claims, such as 50 percent larger L1 + L2 BTB capacity, more effective L1 instruction prefetching for large instruction footprints, and a new predictor dedicated for indirect branches (lower latency, higher accuracy). 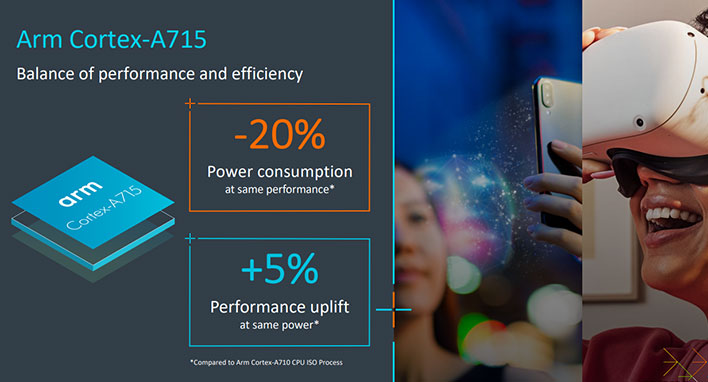 The other new CPU is the Cortex-A715. Arm says it's doubling down on the key value proposition of the Cortex-A700 series with this new addition, which is aimed at maximizing efficient performance.
"We have made a series of targeted improvements to the Cortex-A715 design, including branch prediction accuracy and data prefetching. Consistent IPC gains mean that the Cortex-A715 now reaches the significant milestone of matching the performance of the 2-year-old Arm Cortex-X1 CPU," Arm says.
What this translates to is, according to Arm, a 20 percent reduction in power consumption at the same performance level as the Cortex-A710, and a modest 5 percent performance uplift at the same power level. From Arm's vantage point, the Cortex-A715 is essentially the CPU cluster workhourse of the big.LITTLE CPU cluster, which can be paired its Cortex-X3 and refreshed Cortex-A510 CPU cores (more on that in a moment).
Some notable bits underneath the hood include 2X instruction cache tag bandwidth (higher throughput for brance-intensive code), better prediction accuracy, 4X smaller decoders versus the 710, and bigger data cache banks.
Getting back to the refreshed Cortex-A510, the updated version delivers the same performance as before but at a 5 percent power reduction. While not a game changing reduction, it can help squeeze out a bit more battery life in future devices.
You can read more about these upgrades in Arm's CPU blog.