Designing mobile CPU cores like those found in Qualcomm’s Snapdragon 8+ Gen 1 is only one aspect of Arm’s business. The company licenses designs for a myriad of enterprise use cases as well, which range from the datacenter to edge devices, and everywhere in between. Today, Arm has announced significant improvements coming with its next-generation enterprise Neoverse platform. 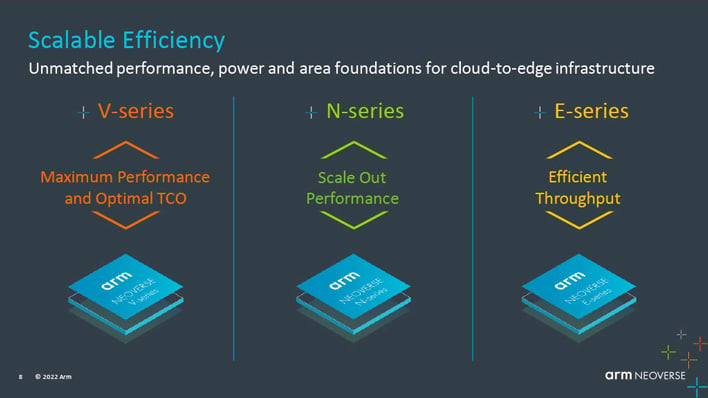 The Arm Neoverse platform is designed for hyperscale and high-performance compute customers. In other words, it is found in systems that power datacenters and the cloud. The Neoverse platform is broadly divided into three tiers: the V-Series, N-Series, and E-Series. V-Series CPU designs maximize performance per core at the top end. E-Series CPU cores sit at the other end of the spectrum, with the goal of efficiently scaling throughput at lower power envelopes. N-Series CPU cores sit somewhere in between with more emphasis on scalable performance. 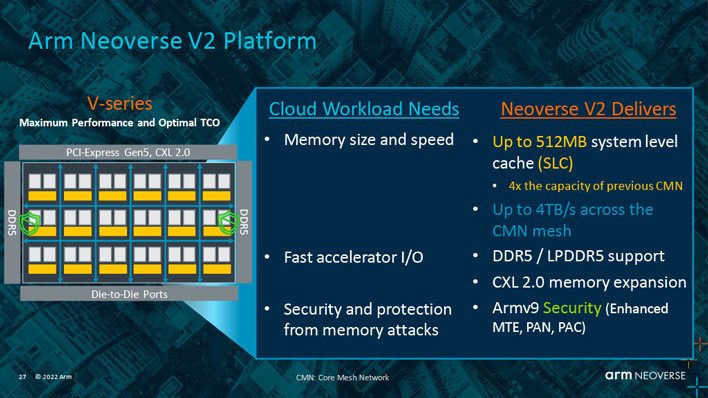 In today's announcement, Arm detailed its new Neoverse V2 platform, dubbed Demeter. It consists of an Armv9 V-series core and the Arm CMN-700 mesh interconnect. Arm revealed that NVIDIA is using the V2 platform as the foundation for its upcoming Grace datacenter CPU. Paired with LPDDR5X memory, the Grace CPU is expected to deliver double the performance per watt of competing architectures such as x86 in a number of data center application workloads. 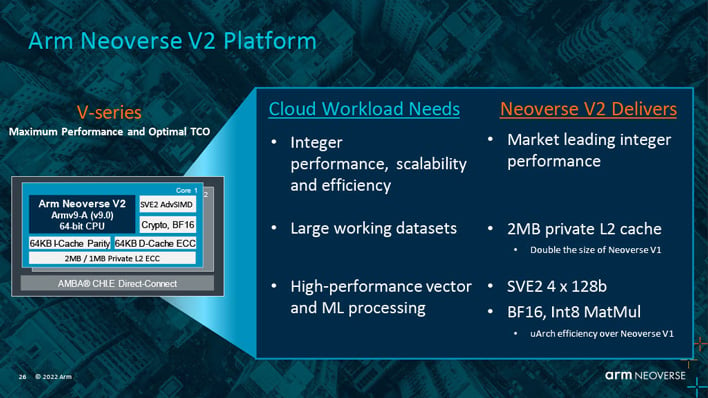 Arm says the Neoverse V2 platform delivers market leading integer performance for customers with cloud workloads. The platform offers 2MB of private L2 cache and up to 512MB of system level cache, which offers up to 4TB/s of bandwidth across the CMN mesh interconnect. In addition to DDR5 and LPDDR5, V2 adds CXL 2.0 memory expansion capabilities to improve memory utilization at scale. 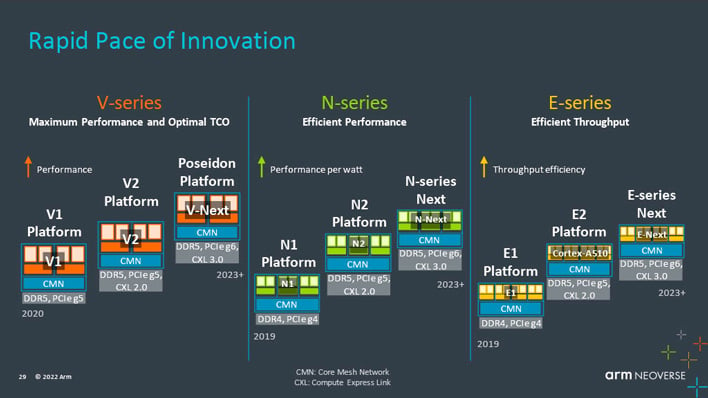 Arm teased the upcoming V-Next generation, also known as the Poseidon Platform, and added a few other nodes to its roadmap. Its next N-Series platform is in development and is expected to become available to partners in 2023. It is tipped for generational improvements to performance and efficiency over the current N2 platform. Arm also indicated its next E-Series platform is currently in the design phase. All three of these upcoming platforms will target PCI-e Gen 6 with CXL 3.0 memory expansion. 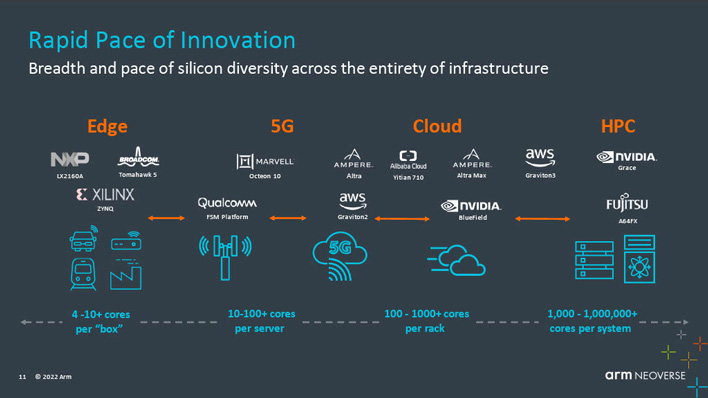 In addition to NVIDIA, Arm has dozens of partners in this space. Arm-based solutions can be found in chips from Ampere, Amazon AWS, Fujitsu, Qualcomm, Xilinx, and Broadcom—just to name a few. Arm’s hardware designs are also backed by a robust software stack and developer infrastructure. Arm notes that 48 of the top 50 AWS customers are leveraging Arm-based Graviton processors in some capacity. Arm has made significant inroads into the data center in recent years. Today's announcements further solidify Arm's focus on the space and bode well for the company's efforts moving forward into 2023 and beyond.