So far, 2020 is the year of the Snapdragon 865 in the Android world, which is Qualcomm's flagship SoC. The Snapdragon 865 powers everything from the Samsung Galaxy S20 family to the OnePlus 8 Series to the Motorola Edge+.

But lurking behind the fancy marking name of Snapdragon 865 is a Kryo 585 CPU, which uses an Arm Cortex-A77 design. It's about that time of year again when Arm lays out the groundwork for its next-generation Cortex-A CPU which will power next year's flagships. And this time, as you might expect, the we're talking about the Cortex-A78.

Cortex-A78: Delivering The Goods Over Cortex-A77

Arm is describing the Cortex-A78 as its "most efficient premium Cortex-A CPU ever designed", which is a moniker that it could use every year as far as we're concerned. Arm is pushing really hard for efficiency, as the Cortex-A78 features the same architecture as the Cortex-A77, but will be used in SoCs built on a smaller process node (5nm). This brings the promise of lower power consumption and an uplift in performance while maintaining the same 1W power envelope. 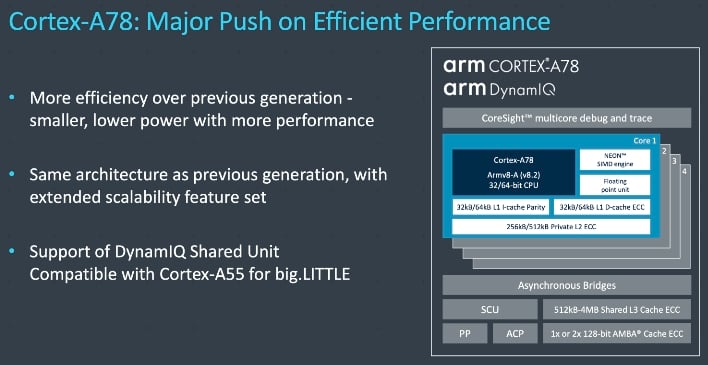 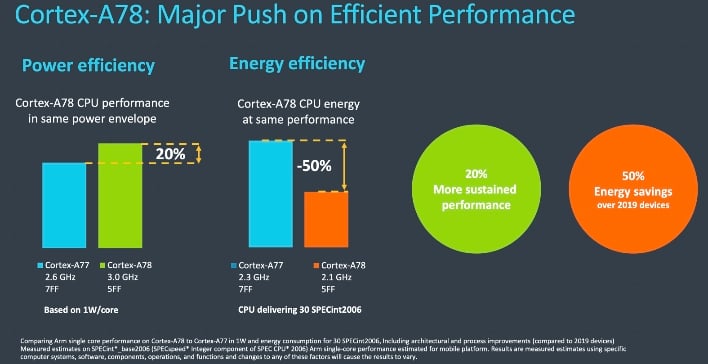 As before, Cortex-A78 can be combined with the Cortex-A55 efficiency cores in a big.LITTLE arrangement.

Taking It To The Extreme: Cortex-X1

As if Cortex-A78 wasn't enough, Arm has also dropped a bomb on the industry with the announcement of the all-new Cortex-X1. This is a custom CPU design (configurable by chipmakers), that is the most powerful Cortex CPU to date. While Cortex-A78 can deliver up to a 20 percent uplift in performance over Cortex-A77, the Cortex-X pushes that delta even further to 30 percent. 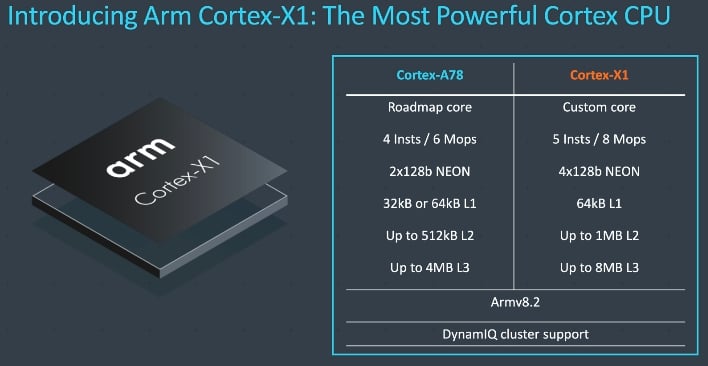 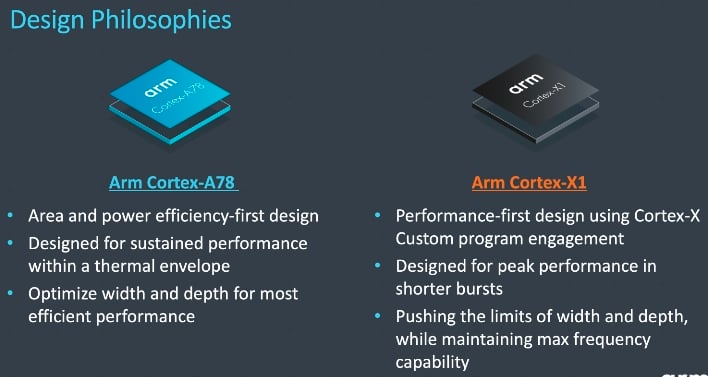 How is Arm able to accomplish this? Well, think of Cortex-X as Cortex-A78 on steroids. Its Neon Advanced SIMD architecture extension scales from 2x128b on Cortex-A78 to 4x128b with Cortex-X1. While Cortex-A78 can be configured with 32kB or 64kB L1 cache, the Cortex-X1 only comes with the latter. Maximum L2 and L3 cache on the Cortex-X1 is also doubled to a maximum of 1MB and 8MB respectively. 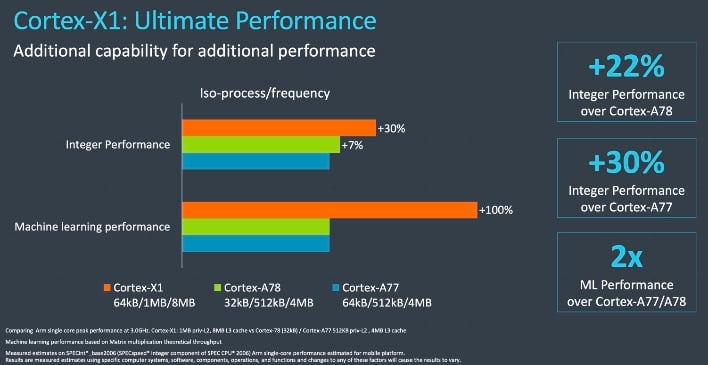 In practice, Cortex-X1 delivers the goods in integer performance over the Cortex-A78 and Cortex-A77, but the big payoff comes with machine learning performance, which shows a 2x increase in performance.

Arm is always touting its generational improvements in graphics performance, and the Mali-G78 is stepping up to the plate with a 25 percent uplift in performance over the preceding Mali-G77. Arm hasn't forgotten about power efficiency either, as we're going to see a 10 percent improvement in energy efficiency as well. 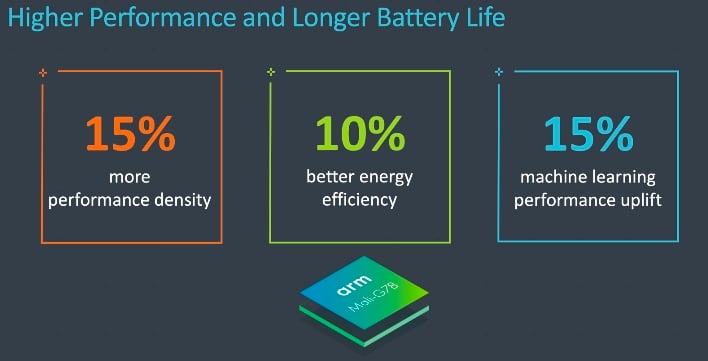 Mali-G78 will be able to accommodate from as few as 7 to as many as 24 shader cores (configurable to OEM requirements) based on Arm's Valhall architecture. This beefed up graphics engine is said to enable "PC and console-like" mobile experiences for gamers; although we'll need to see this in the flesh to qualify that statement. Also being introduced is an asynchronous top level that makes sure that all of the cores are being fed data evenly to enable efficient performance across the board.

There will even be a "sub-premium" tier Mali-G68 GPU, which has all of the features of Mali-G78, but with fewer cores (up to 6).

Not be left out is the Ethos-N78, which is the successor to the Ethos-N77 neural processing unit (NPU). Arm is promising some pretty significant gains over its predecessor including a 2x improvement in peak performance and a 25 percent boost in efficiency. 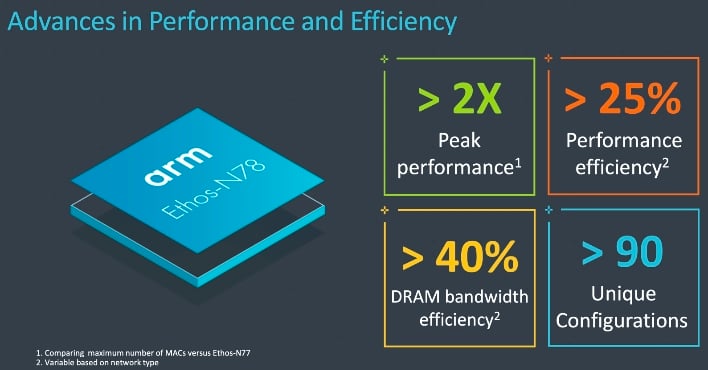 “We can expect to see new use cases across autonomous, AI, XR and smartphones, but these will all require technology that delivers greater performance and security, with expanded and simplified developer access,” writes Arm. “At Arm, we are taking a unique approach to address these requirements, making sure all the building blocks needed for future innovation are optimized to work together through our Total Compute approach.”

We expect to see a number of new SoCs announced over the coming months from the usual suspects including the aforementioned Samsung and Qualcomm. Samsung VP of SoC Design Jonseok Kim in particular expressed support, stating that the company is "very excited to see the new direction Arm is taking with Cortex-X Custom program, enabling innovation in the Android ecosystem for next-gen user experiences.”

We too are eager to see Arm's new "building blocks" in new smartphones over the coming year. Apple has been riding high with the performance crown with its A-Series SoCs, and perhaps Cortex-X and its companion cores will give Android SoC providers the incentive to step up their game.