If you follow the competitive overclocking scene at all, you are probably familiar (at least in passing) with the name of Shamino. The legendary figure works at ASUS now, but he's still up to his old tricks. In fact, he just released the simply-named "Arc OC Tool", which fellow expert tuner Skatterbencher used to take a Gunnir Photon Arc A380 card all the way to 3.1 GHz. 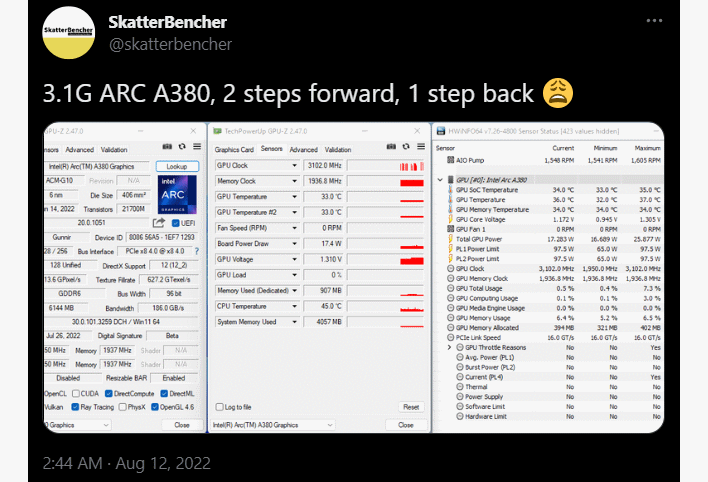 If you've fooled around with the Arc Control application, you may wonder why this Arc OC Tool is necessary. Well, Intel's control panel does offer some overclocking options, but they're somewhat bare-bones and partially non-functional. The GPU voltage slider, for example, doesn't do anything at all, and there also aren't any memory overclocking options.
In addition, the GPU overclocking slider, known as "GPU Performance Boost," is described in the form of a percentage and applies its settings immediately in real-time. This can make testing tedious if you accidentally set the wrong value, and it also complicates the matter of trying to carefully track specific clock rates.


Well, the new Arc OC Tool resolves some of these issues. It's a simple GUI tool to adjust parameters for the overclocking functions integrated in Intel's Graphics Control Library (IGCL). It allows overclockers to directly numerically set the OC frequency offset, the voltage offset, the temperature limit, and the power limit.
Alternatively, if you're feeling brassy, you can "lock" a certain frequency and voltage. Skatterbencher says that this is usually the "most effective" way to increase the clock rate of an Arc GPU, although he notes that it will still be subject to the GPU's power control unit algorithms. That means that if you're hitting too high of a temperature or exceeding the "PL4" power target, you won't see higher clocks.

If you want to grab the Arc OC Tool and play around with it, it's available from Skatterbencher's website. Make sure you take specific note of his warning regarding the voltage settings. They apparently don't set in an intuitive way, where 1.00001 results in +10mV over the default instead of +0.1mV as you'd expect. He warns that if you're not careful, it's possible to set the voltage to over two volts, which could have fatal consequences for your Arc GPU.