The aquarium concept has long been the holy grail for many enthusiast PC builders. The idea is simple enough. Build a computer inside of an aquarium and submerge it in mineral oil or other appropriate non-conductive fluid. The mineral oil does not just look cool, but also helps wick heat away from the components. The desire to mix water and compute even inspired this serene Rock Pi X aquarium build you can make yourself. What if we took the idea a bit more literally, though? Chassis manufacturer MetalFish has literally merged a live fish aquarium with a computer case you can build in, and we are here for it.

MetalFish has dabbled in the concept before with their Fish Cube case. That effort was significantly less impressive though and amounted to little more than a custom acrylic tank that slipped a small formfactor PC in the rear. This new MetalFish Y2 is a veritable work of art. At first glance, you may not even realize the setup is a computer at all. Fish tanks are commonly placed atop cabinets which can store food, cleaning supplies, and other caretaking odds and ends. Nevertheless, that is an RGB cooling fan peeking out of the mesh in the company’s product images. Even the two front facing USB-A ports and power button do not detract too much attention away from the stars of the show up top. 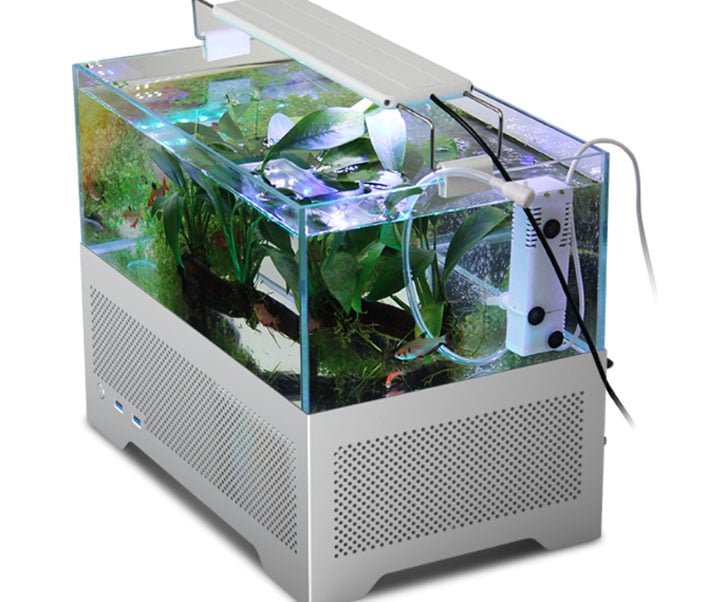 MetalFish specs out the aquarium’s capacity at 13.5 liters. This means it should comfortably hold a few small fish, but please do not go crazy overloading it. The most common mistake novice fish owners make is overloading their tank. Setting up a successful aquarium demands time and patience to condition the water and slowly introduce specimens.

As for computer component capacity, MetalFish indicates support for micro-ATX and mini-ITX boards. The chassis can also support graphics cards up to 220mm in length, though the company recommends keeping under 200mm in length to avoid conflicting with a case fan. Storage capacity is limited to a single 2.5” drive bay, so builders will want to select motherboards with healthy M.2 drive capacity as their needs demand.

While the prospect of putting fish atop a computer with noisy vibrating fans and heat to dissipate may be concerning, the computer is the portion more at risk. Typical pumps used in aquarium filters already tend to rattle loudly and modern case fans can perform with near silence. The heat output of a gaming system is similarly unlikely to have a measurable impact on the temperature of this volume of water. We are not too concerned about the health of fish in this setup as long as it is appropriately managed.


Instead, the chassis’ admittedly beautiful clean lines may be its Achilles’ heel. There are a million and one ways for water to escape a fish tank. Even if a catastrophic break in the acrylic never happens, water changes can be messy affairs. There is nothing to protect from water running down the sides of the tank and into the open-air vents below – to say nothing of whatever cables may be exposed in the rear. Some fish species also like to splash the surface. Back when I used to keep goldfish, I could not walk past the tank without them sending water splattering.

Undeterred system builders will need to import the chassis from China. It is currently listed starting at about the equivalent of $60 USD (¥399), which is not a bad price. Of course, this does not reflect the cost of decorating the tank, never mind the rest of the PC.