Earlier this year, Apple announced its intentions to move away from Intel x86-64 based processors to its own Apple Silicon using Arm architecture. The company stated that the first Macs running Apple Silicon would arrive by the end of 2020 – which would kick off a 2-year transition process for the whole Mac family -- and we're now getting a more dialed-in date according to a familiar source.

While talking about the upcoming iPhone 12 launch, Bloomberg's Mark Gurman threw in just a single sentence that sets into motion what Apple has planned: "The first Mac laptop with Apple’s own processor, among other products, will emerge at another launch in November."

MacBooks powered by Apple Silicon are highly anticipated, as Apple has been touting that the chips will offer the best of both worlds compared to its legacy Intel-powered machines. They will allegedly offer superior performance while also delivering unmatched power efficiency thanks to its use of the 5nm process node.

The first Apple Silicon chips destined for Macs are expected to be based on the A14 Bionic used in the 4th generation iPad Air and the upcoming iPhone 12 family (or the A14X Bionic rumored for the next-generation iPad Pro). In its current configuration, the A14 Bionic features a total of 6 cores: 2 high-performance cores and 4 efficiency cores. In Apple Silicon form, however, Macs will reportedly be equipped with a total of 12 cores (4 performance cores, 8 efficiency cores). 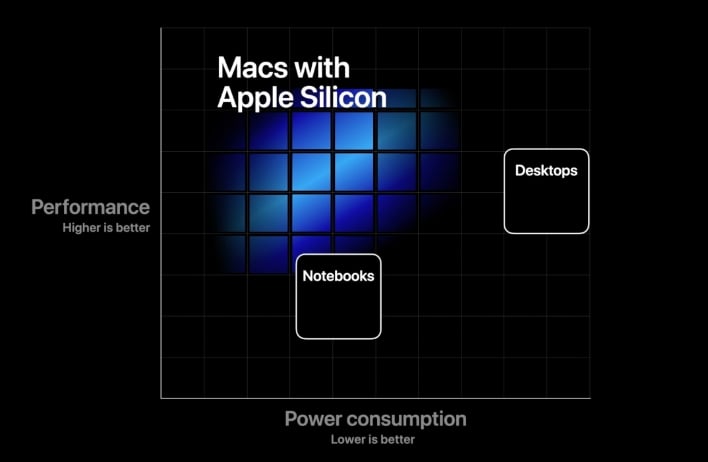 Apple has drawn considerable attention for the performance its A-Series SoCs over the years, with iPhones and iPads easily outgunning their Android counterparts of the same vintage. However, it remains to be seen if Apple can translate that same mobile “magic” to its laptop and desktop computers. We’d especially be interested in seeing how performance holds up with Apple Silicon when running in Rosetta x86-64 emulation, although early benchmarks have been promising even using legacy A12Z chips with the Developer Transition Kit.

The most recent rumors have suggested that a 12-inch MacBook revival will be the first device to receive Apple Silicon. The device, which would weigh in at around 2 pounds, is rumored to have battery life of between 15 to 20 hours compared to the 19 hors for the now-discontinued Intel-based version.

Leaker Jon Prosser is backing up Gurman's November proclamation with more specificity. According to Prosser, Apple will hold an event on November 17th in which it will announce the first Macs with Apple Silicon.

To confirm, there IS a November ARM Mac event.