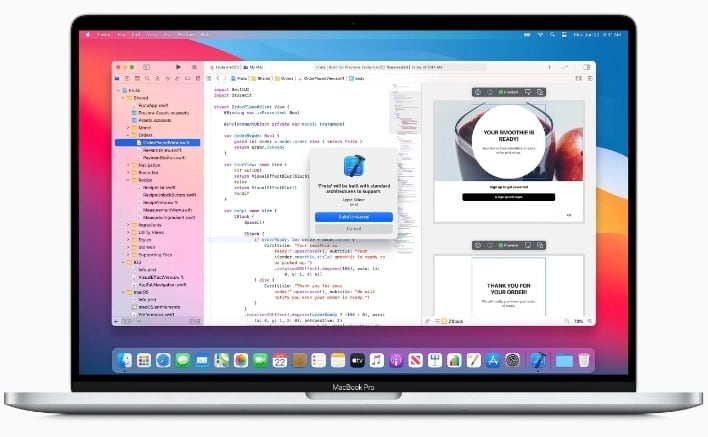 It appears that the switch to Apple Silicon could mean more than just greater performance and efficiency for Macs; it could also bring about a useful feature addition that iPhone and iPad users have taken for granted for years. We're talking, of course, about Face ID.

According to some digging by 9to5Mac into the code for macOS Big Sur Developer Beta 3, references were found supporting "PearlCamera", which is the codename for the TrueDepth Camera that is used for Face ID. If you recall, Face ID was first introduced with the iPhone X back in 2017, and is used across the current iPhone 11 family and the iPad Pro. Face ID replaced Touch ID as Apple's preferred (and more secure) method for biometric authentication.

References were also discovered for "FaceDetect" and "BioCapture", which according to the publication are "clearly built for macOS" instead of being code that was left over from the merging of software features between macOS and iOS/iPadOS. The inclusion of the hardware would also make sense given that macOS Big Sur is capable of running iOS/iPadOS apps, so it would make sense to have Face ID support on-hand. It would also allow for Memoji support on the macOS platform.

Given the hardware similarity between Apple's current A-Series SoCs and their incoming "Apple Silicon" based counterparts, it shouldn't come as a surprise that other mobile centric hardware would be coming to its Macs. By opting for Face ID instead of Touch ID on a device like a MacBook Air or MacBook Pro, users would be able to perform "hands off" authentication to login to their computers (something that Windows 10 users have taken for granted with Windows Hello) and make purchases.

However, it’s likely that the move to include TrueDepth Camera hardware would also necessitate a slightly thicker display lid instead of the razor-thin ones currently in use. Perhaps the thicker lid would also allow Apple to upgrade the woefully antiquated and low-resolution 720p webcams currently in use on its current notebooks.

The use of Apple Silicon will not only bring greater synergy between Apple’s Mac and mobile platforms, but it will also usher in a huge leap in performance over existing Intel hardware (according to the company). Given the performance figures that we’ve seen from the two-year-old A12Z Bionic compared to Intel’s current-generation Ice Lake parts, Apple is already in the “ballpark” with respect to performance. If Apple does end up delivering its first Apple Silicon Macs with 12-core processors before year’s end, we’ll get a first-hand look at what this hardware rethink will mean for the rest of the Mac family in the years to come.