The right-to-repair movement has been gaining momentum in the past year, but that doesn't mean every device is easy to crack open and fix, should the need arise. Naturally, we're curious where Apple's latest iPhone 13 series stands in the realm of do-it-yourself (DIY) repair. The answer can be found in a thorough teardown.
First let's talk specs. The iPhone 13 Pro, which is what just went onto the teardown operating table, is equipped with a 6.1-inch Super Retina XDR OLED display (2523x1170) powered by a custom A15 Bionic system-on-chip (SoC). It also has 6GB of RAM, between 128GB and 1TB of internal storage, and an arrangement of cameras.
There's also an iPhone Pro Max, though it's mostly the same handset in a bigger package with a higher resolution. And as the teardown gurus at iFixIt say, "It's not the size that counts, it's the insides!" Indeed, that is true. So, what's on the inside? 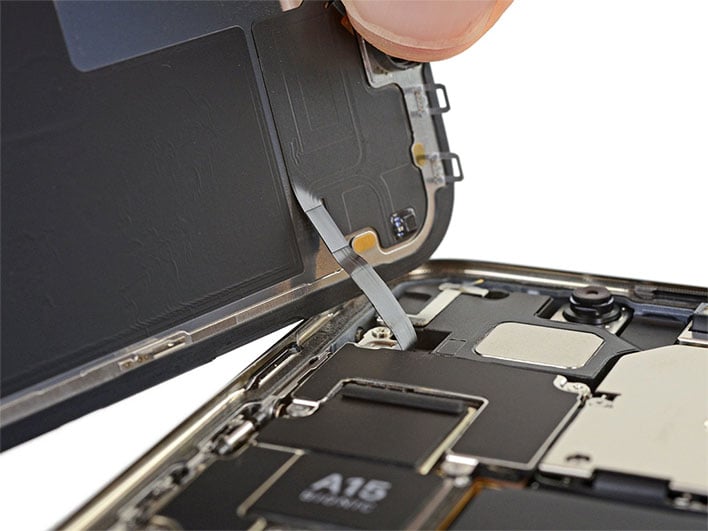 First, a person has to open the phone up. Getting at the guts is fairly similar to the process for the iPhone 12, as it "thankfully inherits one of our favorite smartphone opening features," that being that the display comes off first. It's like opening a book (albeit one that is slightly sticky, and we'll leave it that).
To the site's surprise, there was "some handsome labeling" inside the iPhone 13 Pro, which can be helpful when poking around for the first time. The site also found that the display-mounted earpiece speaker from the previous generation is gone, as is one of the cables. The notch is also 20 percent narrower.
"The clean, minimalist printing mimics the clean, minimalist removal procedure. We can't praise stretch-release adhesive more highly, though we'd love easier access to the tabs," iFixIt notes in its teardown. 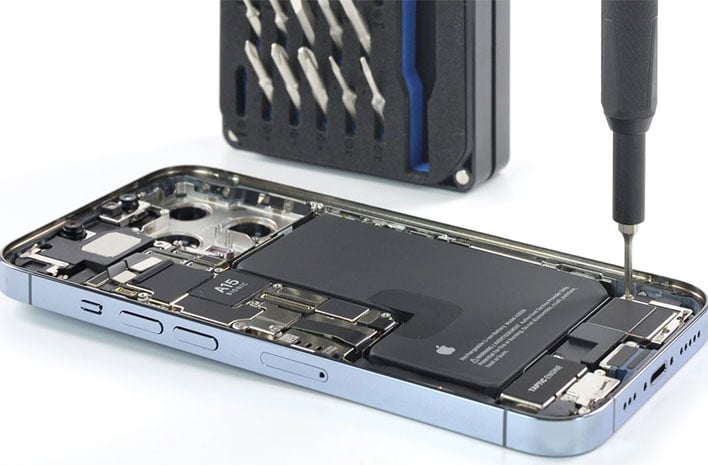 Even swapping out the battery proved to still be feasible, despite rumors to the contrary. All good then, right? Well....not exactly.
Some of the cables run underneath the logic board are "not exactly a piece of cake to access." The teardown also reveals that Apple is still using LPDDR4 memory instead of LPDDR5 and there's still no way to replace the rear glass. But most egregious is that replacing the screen means losing access to Face ID.
"Right now, if you replace your screen, Apple kills your Face ID, unless they control the repair. We swapped sensors and front-facing camera hardware across multiple brand-new units, restarting each one, but nothing worked. Fixing your own iPhone screen could trap you years in the past, in the passcode times," the teardown gurus explain.
That's unfortunate and flies in the face of the right-to-repair movement. However, word around Apple repair circles is that this is a bug that will be addressed in an iOS update. So let's hope that is actually true. In the meantime, the iPhone 13 Pro teardown resulted in a respectable-but-could-be-better 5/10 repairability score.
Images courtesy of iFixIt