Smartphones have never been all that easy to repair, but that hasn't stopped owners from fixing (or attempting to fix) broken screens, dead charging ports, speakers that don't make sound, and a host of other issues. There's nothing quite like the feeling of using a heat gun to melt some adhesive underneath a screen and then using a suction cup to pick up the front of a thousand-dollar smartphone to replace a broken part. Thankfully, we have guides on the internet, and very few are more helpful than the ones from the folks at iFixIt. They're at it again, too, as they've published a teardown guide for Apple's newly-released iPhone 12 and 12 Pro.

Interestingly, the two iPhones, released just yesterday, have so much in common that iFixIt could publish a single teardown guide to handle both of them. That's quite a shift from the iPhone 11 and 11 Pro, since those two devices had different dimensions, different display technology, and many other differences. Apple was able to reduce the engineering effort required for the two new iPhones by putting them in the same enclosure, equipping them with the same OLED display, and using the same basic motherboard design. The two devices even use the same 10.78 Wh battery, which has more than 10% less juice than either the iPhone 11 or 11 Pro. Apple's battery life specs haven't changed, though, maybe owing to the new 5-nanometer A14 Bionic chip's better efficiency. 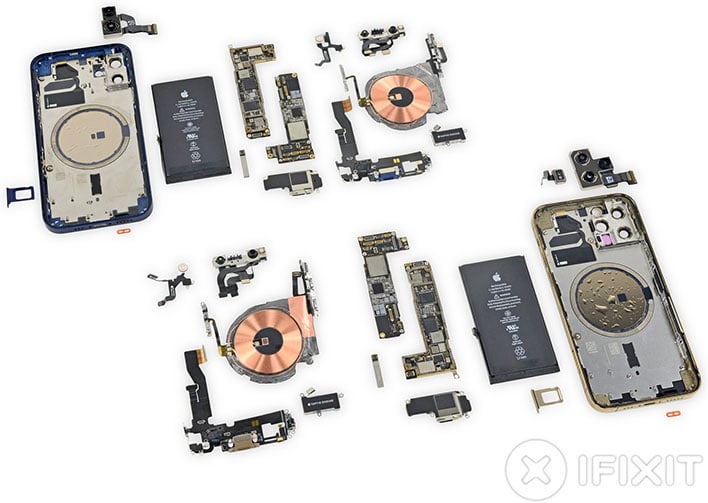 So what's different enough to warrant a whopping $200 extra for the iPhone 12 Pro? The first obvious feature is that the iPhone 12 base model starts at just 64 GB of storage, where the 12 Pro starts out at 128 GB. That's, frankly, pretty skimpy in an $800 to $1000 phone. Second is the LiDAR scanner, which is required for more accurate polygonal representations of real-world items. That should make apps that use iOS's ARKit for Augmented Reality more immersive and better represent the room. The metal used in each device's side band is different: the iPhone 12 Pro gets stainless steel vs. aluminum on the iPhone 12. And then last but not least, the iPhone 12 Pro gets a telephoto lens. These two phones are so similar that Apple didn't bother making different camera bumps, instead opting to just slap some plastic spacers in where the Pro model's extra features would be.

Other interesting tidbits iFixIt found on the iPhone 12 include a small glass window and dedicated antenna module on the side for mmWave 5G signals. Since 6 GHz+ radio waves are so easily obstructed by walls, Apple had to cut a hole in the metal band around the edge to get that signal to the modem. Speaking of modems, Apple is still using Qualcomm for cellular connectivity. The iPhone 12 and 12 Pro deconstructed by iFixIt had the same SDX55M 5G modem that most Android flagships have been using for most of a year, rather than the newer SDX60M modem that includes features like mmWave and Sub-6 carrier aggregation to keep signals strong when both network types are present. Also, the MagSafe connector on the backside has an array of 18 magnets to keep magnetically-attached wireless charging accessories attached.


In bonus coverage, Canadian YouTuber MobileReviewsEh tested the ceramic shield on the iPhone 12 by attempting to crack the screen of both an iPhone 11 and 12, and then compare how much force the two required. You can watch for yourself in the video above, but the short story is that the iPhone 11 needed around 350 newtons of force to crack the screen, while the iPhone 12 needed 440 newtons. That means the ceramic shield is doing its job, preventing the screen from cracking under more stress than the previous generation. That no doubt comes as good news to prospective iPhone 12 buyers. MobileReviewsEh also tested scratch resistance and some other features, so be sure to hit the embed for more info.

Next up for Apple are the two extremes: iPhone 12 Pro Max and iPhone 12 Mini. Apple's largest and smallest members of the iPhone 12 family go up for preorder starting November 6. We think the iPhone 12 Mini, if it's successful, could spur Android phone makers to think smaller when it comes to flagships. We'll find out in the days ahead if that comes to pass.