Apple yesterday made a somewhat surprising cancellation in its hardware lineup. The HomePod smart speaker initially launched in early 2018 and was never the big sales hit Apple expected. As a result, the HomePod is getting kicked out of the Apple family.

The company issued the following statement to TechCrunch last night regarding the HomePod after the Space Gray version of the speaker showed up as unavailable on its website:

HomePod mini has been a hit since its debut last fall, offering customers amazing sound, an intelligent assistant, and smart home control all for just $99. We are focusing our efforts on HomePod mini. We are discontinuing the original HomePod, it will continue to be available while supplies last through the Apple Online Store, Apple Retail Stores, and Apple Authorized Resellers. Apple will provide HomePod customers with software updates and service and support through Apple Care.

When the HomePod initially launched, it was priced at a staggering $349, compared to competitors from Amazon and Google that were available for much less. Apple would later officially drop the price to $299 in April 2019, but that still wasn't enough to appease the critics. Retailers have gone even further with price cuts, as the regular sales price of the HomePod often hovers around $199 at Best Buy.

While the HomePod was praised for its audio quality, it was often criticized for not living up to its "smart" speaker designation. The fault lies with the Siri digital assistant, which is not as advanced or as useful as the Google Assistant or even Amazon Alexa. However, the HomePod does offer deep integration with other Apple products and services and supports audio handoff with devices like the iPhone. 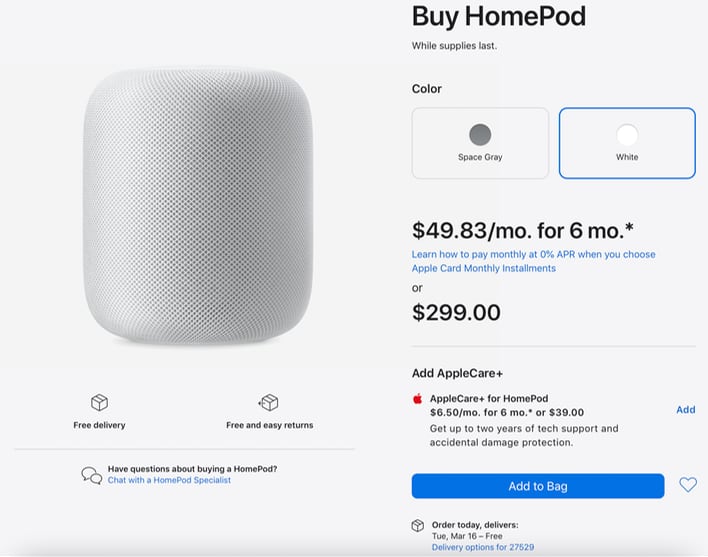 But perhaps the writing was on the wall for the original HomePod when the smaller and cheaper HomePod mini launched last year. It packs most of its bigger brother's features but is available for a much more palatable $99.

As of now, the HomePod is available to purchase directly from Apple only in White for $299 "While supplies last." Both colors, however, are still in stock for $299 at Best Buy.