Water-cooled graphics cards aren't exactly new. For years, enthusiasts who build their own custom liquid cooling loops have incorporated blocks onto their GPUs to keep the heat at bay without producing a ton of noise. In recent years, some manufacturers have released cards with their own closed-loop AIO coolers. Gigabyte has gone a totally different route, though: its AORUS gaming brand has announced the RTX 3080 Ti GAMING BOX. This all-in-one Thunderbolt enclosure holds inside it a water-cooled GeForce RTX 3080 Ti.

NVIDIA has supported external graphics cards on the Thunderbolt 3 bus for quite a while, and eGPUs are nothing new. They can give some serious gaming chops to a lightweight notebook that normally relies on integrated graphics. Because of the horsepower of Tiger Lake-based 11th generation CPUs, that's actually a pretty viable gaming solution that would allow someone to have a single notebook like the Dell XPS 13 2-in-1 for travel and for play at home. A Core i7-1165G7 likely has plenty of horsepower to drive games, especially at very high resolutions either on an internal 4K display or an external montiro where the graphics card becomes a bottleneck.

This modularity does come at the expense of a some performance, since the GPU is hamstrung by the 4x PCIe 3.0 connection that Thunderbolt 3 uses. The GPU is limited to a 20 Gbps between the CPU and the graphics card, and accelerating a notebook's internal display will use some of that bandwidth as the GPU pushes the frame buffer back to the notebook for display. It's not as big of a deal on an external display that can connect directly to the graphics card, however. It's a good thing the GeForce RTX 3080 Ti has 12 GB of GDDR6X memory, then, since it should be able to hold plenty of texture, model, and shader data to compute complex scenes. 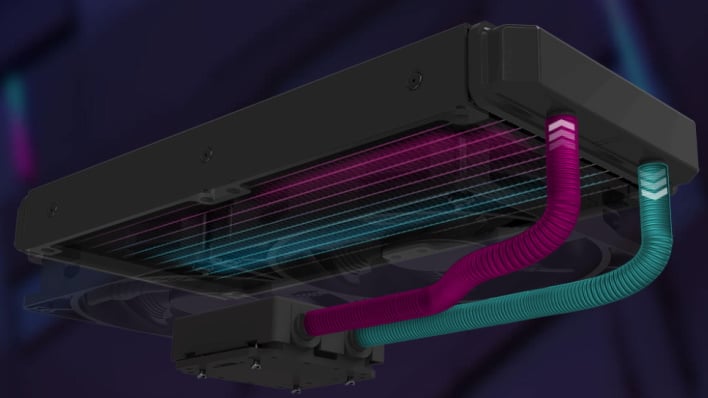 The cooler Gigabyte uses in the AORUS RTX 3080 Ti GAMING BOX is an all-in-one closed loop that integrates the pump into the block like many popular AIO CPU coolers. It comes with a 240-millimeter radiator with a pair of 120-mm fans pushing air through the fins and carrying heat out of the chassis. The fans use temperature controls to keep noise to a minimum, which is especially appreciated while the GPU isn't in use. The block has an integrated copper plate that covers the GPU, VRM, and video memory to carry away all excess heat.

AORUS added Gigabyte's RGB FUSION 2.0 support to the chassis, so that its "neopunk" stylings can sync with other RGB hardware and integrate into an existing setup. The RGB Fusion software can turn off all LEDs as well, so those who aren't interested in the fancy lighting can just disable it. The company also announced that it's compatible with NVIDIA's Studio drivers for content creation.

Pricing has not yet been disclosed, but with an external Thunderbolt enclosure, all-in-one cooler, and the GeForce RTX 3080 Ti itself, all this external GPU horsepower won't come cheap. While the very worst of the chip shortages may be behind us, the secondary market for new graphics cards hasn't returned to normal yet. However, with a cryptocurrency crackdown in China and former miners dumping a glut of used GPUs onto the second-hand market, the market's appetite may yet be sated this year.