Amazon founder Jeff Bezos has officially relinquished the title of Chief Executive Officer (CEO) of the world's second largest retailer (behind only Walmart), a designation that now belongs to Andy Jassy, who himself founded and previously served as CEO of Amazon Web Services (AWS) from April 2016 until this month.
We knew this day was coming, it just was not clear exactly when. Amazon disclosed what had been a pending change in leadership in February when sharing its financial results for the fourth quarter of 2021.
"Amazon is announcing today that Jeff Bezos will transition to the role of Executive Chair in the third quarter of 2021 and Andy Jassy will become Chief Executive Officer at that time," Amazon stated.
It is possible that Jassy could have been running things for the past couple of weeks. Whatever the case might be, as of this writing, there is no follow-up announcement on the matter. However, Amazon updated its Investor Relations page to indicate that Jassy is indeed the company's President and CEO, and not Bezos, who is listed as the Executive Chair.
This is a big deal, considering that Amazon's monumental rise in the retail space came under the leadership of Bezos, who founded the company on this date 27 years ago (July 5, 1994). It has been an incredibly long and successful run, financially speaking.
A lot of companies have come and gone in the past 27 years. And of course some have survived but changed hands one or more times, and are now a shell of their previous existence. Amazon, meanwhile, went from selling books to hawking practically everything imaginable, and changed the e-commerce landscape with its Prime membership program.
Amazon also expanded into making its own hardware too, like its Fire tables and Echo devices, and has made big acquisitions of its own (like buying Twitch for $970 million). The company has not yet released its second quarter earnings report, but during the first quarter of 2021, its net sales increased 44 percent to $108.5 billion. Amazon's first quarter profit checked in at $8.1 billion.
Jassy has been with Amazon almost from the beginning, having joined the team in 1997. Since then, he has held various leadership roles, including both business-to-business and business-to-consumer. He graduated from Harvard University. Jassy is a big reason why Amazon makes so much money—AWS accounts for a huge portion of the company's annual profits. 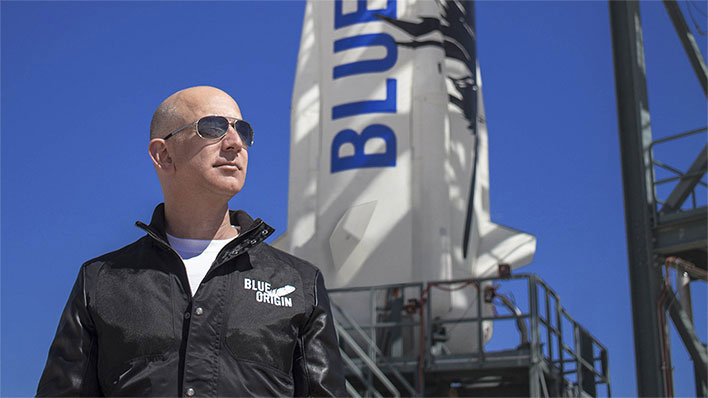 He has big shoes to fill for sure. And as for Bezos, well, he's leaving planet Earth. Not for good, mind you, but as a passenger on Blue Origin's New Shepard rocket, which will take its first human flight into space in a couple of weeks. His brother is coming along for the ride.
"You see the earth from space and it changes you. It changes your relationship with this planet, with humanity. It's one Earth," Jeff said earlier this month. "I want to go on this flight because it's the thing I've wanted to do all my life. It's an adventure. It's a big deal for me."
Safe travels Bezos brothers, and good luck Jassy.