Amazon’s Bezos To Boldly Blast Off For Space On Blue Origin Rocket, With Free Prime Shipping

Here's something you may not have known about Amazon founder Jeff Bezos—the dude has nerves of steel. We can surmise as much based on his decision to hop into Blue Origin's New Shepard rocket for its first human flight into space, scheduled for a few weeks from now. Such boldness runs in the family, because he's bringing his brother along with him.
Bezos and his brother will depart Earth's atmosphere a month and a half from now, on July 20, 2021. The billionaire said space travel was a dream of his ever since he was five years old, and is elated to embark on "the greatest adventure" with his "best friend," his brother, Mark Bezos, who has also done okay for himself over the years.

"You see the earth from space and it changes you. It changes your relationship with this planet, with humanity. It's one Earth," Jeff says. "I want to go on this flight because it's the thing I've wanted to do all my life. It's an adventure. It's a big deal for me."
This is not a trip to the Earth's moon, so the Bezos brothers will not quite be following in the footsteps of Buzz Aldrin. But they will be making history nonetheless. Blue Origin is auctioning off one additional seat for the rocket's first crewed flight, with the high bid already at $2.8 million. Bids have come from nearly 6,000 rich folk from 143 countries. 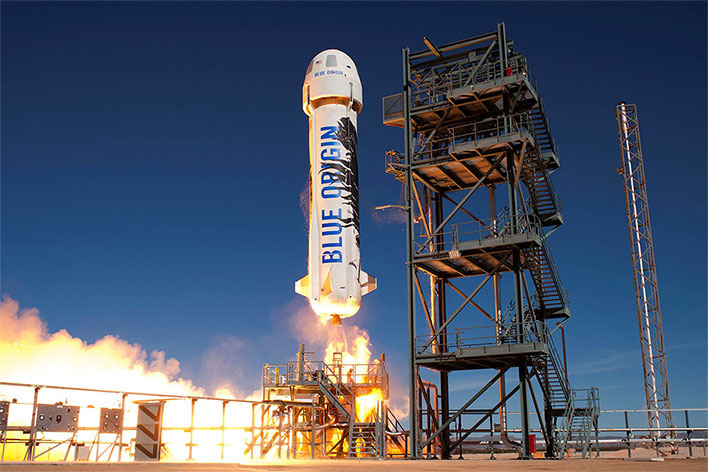 "The winning bid amount will be donated to Blue Origin’s foundation, Club for the Future, whose mission is to inspire future generations to pursue careers in STEM and to help invent the future of life in space," Blue Origin says.

It's not clear how much the Bezos brothers paid for their seats on the flight, or if they got a discount for the publicity. Regardless, this is a remarkable opportunity, and one that requires a fair amount of courage, in addition to lots of money. Barring a hiccup between then and now, the rocket will blast off into space on July 20, ascending 100 kilometers (around 62 miles) above sea level. 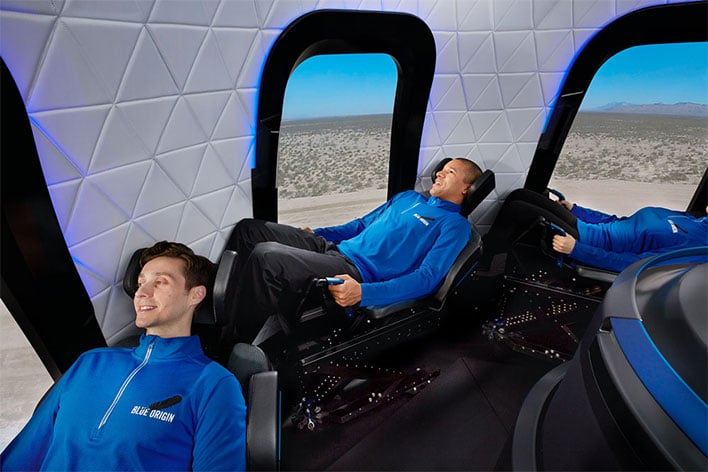 At that point, the pressurized crew capsule will separate, allowing the six passengers inside to take in a breathtaking view of our humble rock. Each person has their own window seat, and according to Blue Origin, these are the largest windows to have ever flown in space.
It is a fully autonomous capsule—Blue Origin says every person on board is a passenger, noting there are no pilots. The flight will last 11 minutes, which at the current high bid, works out to $254,545 per minute, or $4,242 per second.
Safe travels to everyone going up, and enjoy the view!