Have you ever wanted to go into space? Do you have a lot of money burning a hole in your pocket? Well then have we got a deal for you. The bidding for Blue Origin’s first human spaceflight has officially opened up.

The initial bidding began yesterday and will go on until May 19th. During this time, bidders may bid any amount they want on the website. The bids will officially be made visible on May 19th and bidders will need to exceed the highest bidder. Bidding closes on June 12th and there will be a live auction. The money from the winning bid will be donated to Blue Origin's charitable organization known as Club for the Future. Club for the Future’s focus is to “inspire future generations to pursue careers in STEM and to help invent the future of life in space.”

Bidders do have certain physical requirements they must meet if they are to board the craft. Bidders must be eighteen years or older (or the age of majority in their country of residence), be between 5’0” and 6’4” in height, and weigh between 110 and 223 pounds. They must also be able to climb seven flights of stairs within 90 seconds, be able to withstand up to 5.5Gs, and perform a variety of other minor tasks such as seeing and responding to alert lights. The winning bidder will receive “familiarization and training” prior to the flight at one of Blue Origin’s facilities or another location. 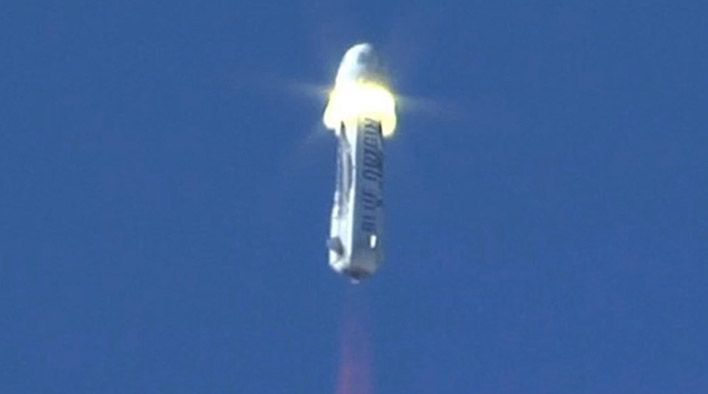 The launch of the Blue Origin “New Shepard” suborbital spaceflight system will take place on July 20th, 2021. July 20th is a significant date as it marks the 52nd anniversary of the Apollo 11 lunar landing. The crew members will arrive at the launch site in Texas several days before the launch. The spacecraft will reach its highest point only four minutes after take-off and will land near the launch site within ten minutes after launch. The crew will be seated in a pressurized capsule that does not require them to wear spacesuits. The capsule has a gigantic window so that the crew members can enjoy the view.

The craft contains several safety features to protect crew members. For example, the rocket includes an “escape motor." This escape motor would push the capsule away from the rocket’s boosters if there is any threat. Ariane Cornell, Blue Origin’s Director of Astronaut and Orbital Sales, stated in a recent news briefing, “We’ve spent years testing, so we’re ready.”

Blue Origin is also currently working on building a moon lander. The plans for the lunar lander were presented to NASA last summer and will need to undergo intense testing. Blue Origin hopes they can launch the lander sometime in 2024.