The latest version of Google's mobile operating system is Android 12, and you might be wondering when your non-Pixel handset is in line to receive it. That is going to depend on your device maker, the specific smartphone model you own, and even your wireless carrier. That said, ASUS has shared its Android 12 timeline for a few of its phones, including the ROG 5, ROG 5s, and ROG 3.
If you have not already, check out our collection of ROG Phone 5 benchmarks from earlier this year. It's a beastly phone, made even more powerful this summer when ASUS refreshed it with Qualcomm's Snapdragon 888+ processor. That upgrade gave it even more pep, with a slightly faster Prime core (2.995GHz versus 2.84GHz) and a tweaked Hexagon 780 AI engine (32 TOPS versus 26 TOPS).
So, when is Android 12 is scheduled to land on the ROG Phone 5, 5s, and 3? Early next year... 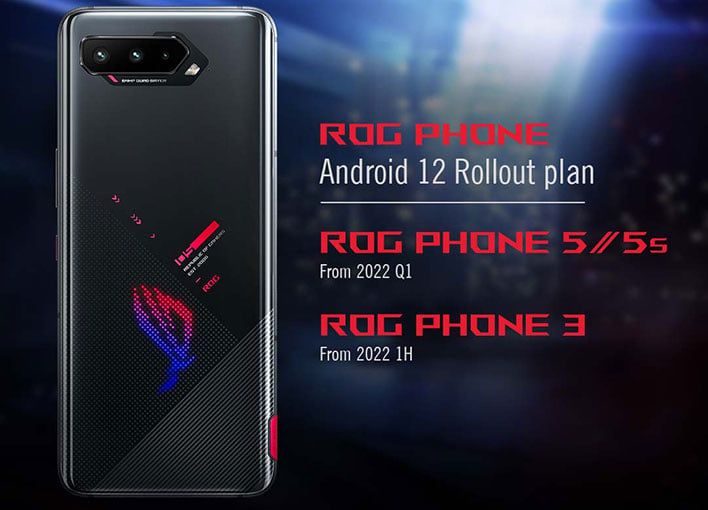 The latest models—ASUS ROG Phone 5 and 5s—will receive Android 12 first among the company's gaming handsets, with a rollout scheduled to begin in the first quarter of 2022. Then sometime in the first half of next year, Android 12 will begin getting pushed out to ROG Phone 3 handsets. That means Android 12 should start hitting some ROG Phone 5 and 5s devices by March 2022 at the latest, and ROG Phone 3 models by June at latest.
Some ASUS Zenfone models will receive Android 12 updates even earlier, according to the timelines ASUS sent us this morning... 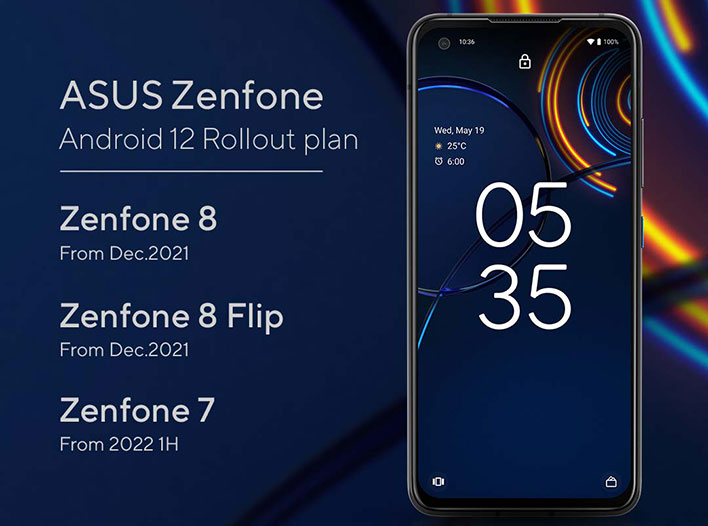 Android 12 looms right around the corner for the ASUS Zenfone 8 and Zenfone 8 Flip—both are scheduled to begin receiving the latest OS update in December. Then in the first half of next year (so again, June 2022 at the latest), the Zenfone 7 family will start welcoming Android 12 into their clutches.
"This update inherits the major functional changes introduced in the official version of Android 12, as well as continuing the popular ASUS battery-and performance-management features. For Zenfone models, it also includes ZenUI-specific changes that allow easier navigation, streamlined control panels, increased visibility for better control and more customization options," ASUS tells HotHardware.
ASUS also tells us it has already recruited Zenfone 8 users for its Android 12 beta testing program, to help root out and fix bugs before it begins rolling out in December.

Android 12 introduces a refreshed look and UI experience it is calling Material You. It also implements enhanced privacy and security features, complete with a new privacy dashboard. And there's a plethora of smaller changes to make life easier, like holding down the power button to bring up Google Assistant, and a Car Key feature to unlock a compatible vehicle with your Android device.
It will inevitably take some time for Android 12 to claim a big chunk of the overall market. We'll be keeping an eye out for announcements on when other specific phones are due to make the leap.