Pixel users have taken to Twitter in recent days to report some serious issues they have encountered since Android 12 rolled out. This news comes as Google is set to begin shipping its flagship Pixel 6 and 6 Pro on October 28th.
Pixel owners took to social media and Google Support forums to find out if other owners were experiencing issues as well. The issues reported ranged from touch haptics no longer working and animations running slower, to apps randomly crashing. Pixel problems were not limited to a specific model.
Google did begin responding to some Twitter posts with a fix for the touch haptics issue for one owner. Made By Google directed the owner of a Pixel 4a to try a soft reboot by holding down the power button for 30 seconds. The owner tweeted back that the fixed “Worked perfectly”. 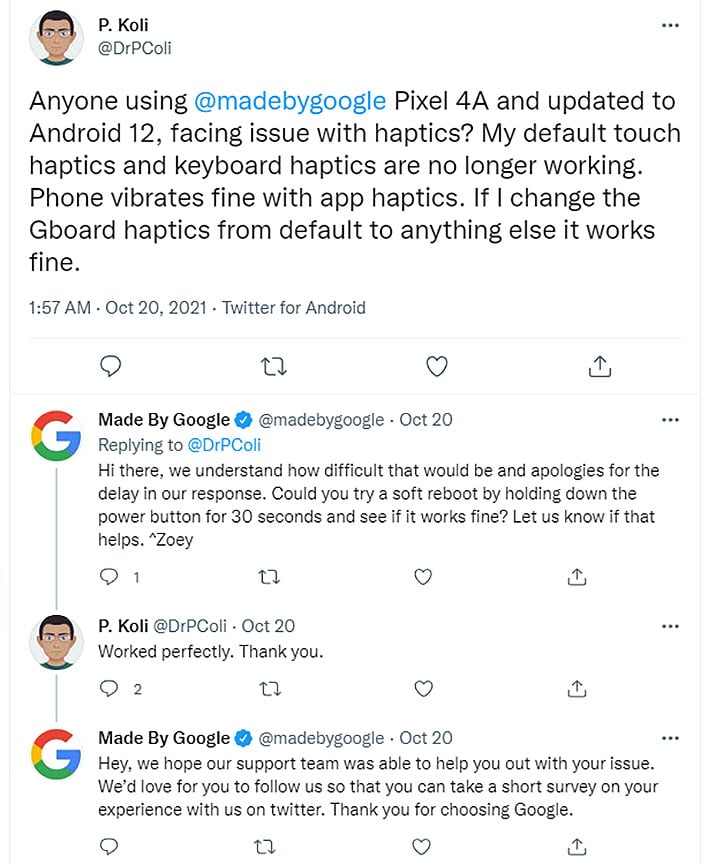 Android 12 introduces Google’s new design called Material You. It includes an updated UI, refreshed app widgets, updated notifications, and a new “stretch” over-scroll effect to make scrolling smoother and various other updates. With all the new features and updated UI, it would have been surprising if there had not been a few bugs to work out after release.
Google is also recommending some users switch to safe mode to find out if the issues are rooted in a third-party app. This could mean that it could take some time to work out all the bugs as app developers update their software to play friendly with Android 12.
Thankfully for people waiting on their new Pixel 6 or 6 Pro phone Google has about a week to work out bugs being reported. This may make their first experience with their new phone a more enjoyable one. For owners of other phone manufacturers, you will have the convenience of more bugs being fixed before Android 12 reaches your handset later this year and into 2022.
Are you a current owner of a Pixel phone that has encountered issues since upgrading to Android 12? If so, what issues have you seen? Let us know down in the comments and if you have found fixes for those issues.