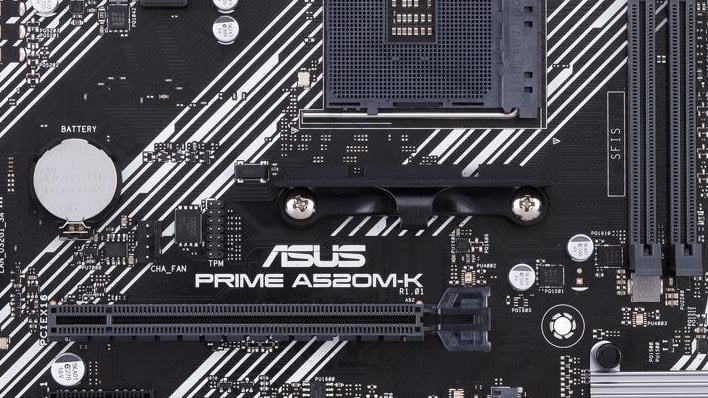 Building a Ryzen system right now either requires a pricey motherboard based on the flagship X570 chipset, the recently released B550, or sticking with previous-generation mid-range chipsets like the B450. Help for budget builders with severely limited funds is on the way though, in the form of the as-yet unannounced AMD A520 chipset, at least according to some online listings. It seems that boards from ASUS and ASRock have gone on sale ahead of any announcement of the chipset from AMD or from either of these board manufacturers, however.

Right now, Newegg is selling ASUS's Prime A520M-K motherboard for $75.99. This board is apparently compatible with Zen 2 and current consumer APUs like the Ryzen 5 3400G, but it doesn't appear on ASUS's website just yet. The board has a PCI-Express x16 slot, a pair of PCIe x1 slots, a single M.2 socket, and two DDR4 DIMM slots that support up to 4,600 MHz RAM to feed current Socket AM4 CPUs. It's a pretty barebones board, but for the price it seems to present good value for budget builders. 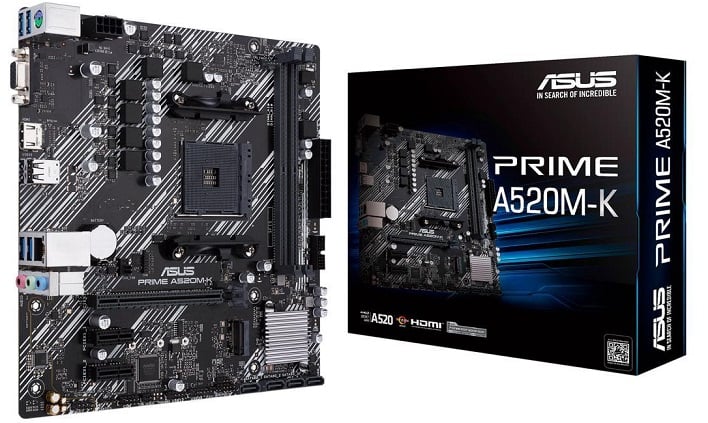 In fact, it looks like a whole swarm of boards based on the A520 chipset are inbound. According to some new leaks, ASRock's lineup will include both the micro-ATX A520M Pro4 and mini-ITX A520M-ITX/ac. The A520M Pro4 looks like a natural extension of ASRock's other M Pro4 boards, which typically provide solid value for the money. This iteration has a pair of PCIe x16-compatible slots, four DIMM slots, and an M.2 socket with its own integrated heat spreader. The mini-ITX board trims that down to a pair of DIMM slots and a single x16 slot, but with integrated 802.11ac Wi-Fi.

We shouldn't have to wait too long for official word from AMD. Rumor has it an announcement of these chipsets is coming on August 18th. We're sure that we'll see more boards both from these companies and other manufacturers next week. Apparently the budget chipset won't support the latest PCI-Express 4.0 connectivity, but at this rumored price level, that's not unexpected.

All of this begs the question, though: where are the low-cost Zen 2 CPUs to ride in these motherboards? We reviewed the quad-core Ryzen 3 3300X and Ryzen 3100 all the way back in May, but those CPUs are nowhere to be found. The Ryzen 3 3300X in particular represents a pretty solid value at $129, offering single-threaded performance far above the older Raven Ridge-based Ryzen 5 3400G, and nearly as much multi-threaded grunt as a last-gen six-core Ryzen 5 2600X. Even the lowly Ryzen 3 3100 is a bit improvement over AMD's current consumer APUs. We have to hope that availability for those processors isn't far behind these budget motherboards.