We have known for quite some time that new laptops are on the horizon, with certain models pairing AMD's next round of mobile CPUs based on Zen 3 with NVIDIA's upcoming GeForce RTX 30 mobile series GPUs. The combination of Zen 3 and Ampere in a laptop has us salivating. So do the latest benchmark leaks, which highlight a couple of forthcoming ASUS ROG Strix models.
ASUS actually has a whole bunch of designs and configurations on tap, if the rash of recent leaks are any indication. Just a few days ago, we wrote about an ROG Zephyrus flexing a Ryzen 9 5900H and GeForce RTX 3080 Mobile GPU in Geekbench. We have also seen a retailer tip the pending launch of a TUF Gaming laptop setup pairing an Intel Core i7-11370H CPU with a GeForce RTX 3060 Mobile GPU.
These newest Geekbench entries, however, are all about pairing unreleased AMD CPUs with NVIDIA GPUs, in a couple of ROG Strix laptops. Here is a look at the two listings side-by-side... 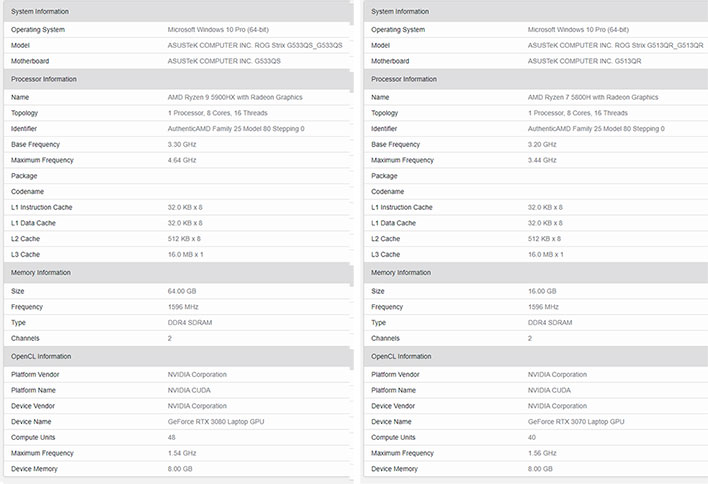 The entry on the left is the ROG Strix G533QS and is a higher end configuration with a Ryzen 9 5900HX CPU and GeForce RTX 3080 GPU. According to the listing, the Ryzen 9 5900HX is an 8-core/16-thread processor with a 3.3GHz base clock and 4.65 boost clock, and has 16MB of L3 cache. As for the GPU, it is shown as having 48 compute units, a 1.54GHz clockspeed, and 8GB of memory. The laptop itself is configured with 64GB of DDR4-3200 RAM.
Over on the right, the ROG Strix G513QR is configured with a Ryzen 7 5800H CPU (8 cores / 16 threads, 3.2GHz base clock, 3.44GHz boost clock, 16MB L3 cache), GeForce RTX 3070 Mobile GPU (40 CUs, 1.56GHz clockspeed, 8GB of memory), and 16GB of DDR4-3200 RAM. The boost clock is either wrong, or the result of this being an early engineering sample.
The model with a GeForce RTX 3080 Mobile posted an OpenCL score of 133,543, while the GeForce RTX 3070 laptop scored 112,448. We can plug those in to Geekbench's collection of average OpenCL scores for various GPUs, to see how they compare. Let's have a look...
We don't want to read too much into this because it's only a single benchmark run, and it represents unreleased hardware. But looking at the numbers, the GeForce RTX 3080 Mobile is on par with a desktop GeForce RTX 3070, and leaps and bounds better than a GeForce RTX 2080 Max-Q GPU.
The GeForce RTX 3070 Mobile, meanwhile, is about as fast as a GeForce RTX 2080 Super, according to the numbers above, and also quite a bit faster than a GeForce RTX 2080 Max-Q.
We'll have to wait and see how things play out, but these numbers are certainly encouraging. And of course it will be interesting to see what kind of price points these sort of laptops will command. Hang tight, as we anticipate AMD and NVIDIA announcing their new hardware either at CES, or around the same time frame.