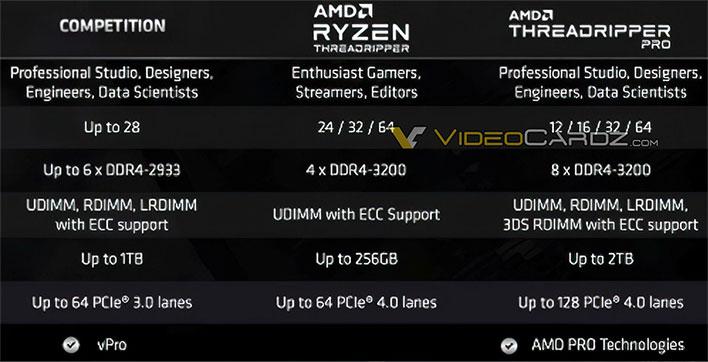 If this is all real, the Threadripper Pro series will up the ante with support for 8-channel DDR4-3200 memory, whereas the non-Pro models support up to 6-channel DDR4-2933 RAM. The Pro models will also widen support to include RDIMM, LRDIMM, and 3DS RDIMM, and be able to handle up to 2TB of RAM versus 256GB on the regular models. And on the PCI Express 4.0 front, Threadripper Pro doubles the number of lanes to 128.
Of course, these chips will also feature AMD's security and manageability enhancements that accompany its Pro labeling, same as with its Ryzen Pro processors.
According to the rumor, AMD will be announcing the new chips on Tuesday, July 14. Pricing is not yet known.