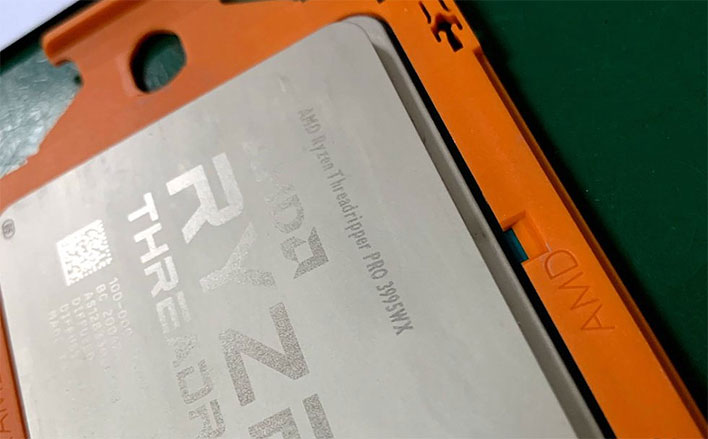 One of two things is seemingly happening in the CPU space—either AMD is getting ready to launch a new line of Threadripper Pro processors, or someone is having fun in Photoshop (or maybe GIMP) to make it look as though a new Pro series is on the horizon. If it is the former, it will be the first time AMD has given its Threadripper family the Pro treatment.
AMD reserves its Pro label for desktop and laptop processors that have additional features and platform requirements, mostly geared towards security—things like Memory Guard for real-time encryption of system memory, and other built-in security bits. Pro series chips also enable easier manageability for IT administrators.

"Designed to simplify administration of your fleet of PCs, AMD incorporates a comprehensive set of professional features including support for Asset Inventory, KVM, and Remote Management Firmware Updates," AMD explains.
There are no Pro versions of any existing Threadripper processors, though that might change. Over at Chiphell, someone posted a photo of a supposed Threadripper Pro 3995WX. It was posted around the same time that Videocardz reported on an anonymous tip claiming a Threadripper Pro series will launch next week.
It is said the Threadripper Pro series will offer the same security and management features as AMD's Ryzen Pro processors for the desktop. In addition, Threadripper Pro is tipped to support up to 2 terabytes of 8-channel DDR4 memory. This would be an upgrade over the regular versions of Threadripper, which support up to 256GB of 4-channel memory. This could mean a new socket as well, and specifically sWRX8.
We're not sure how much demand there will be for a Threadripper Pro series, if it comes to fruition. It depends on where pricing lands, especially in relation to AMD's EPYC server processors, and what clockspeeds will be offered.
Rumor has it Threadripper Pro will launch next Tuesday, July 14.
Thumbnail/Top Image Source: Chiphell via Twitter (@9550pro)