Today marks the launch of new high-end desktop (HEDT) processors from both AMD and Intel, with each chipmaker cranking out new slices of silicon based on each one's latest generation CPU architectures. As such, the stage is set for yet another showdown between these two tech behemoths as they jockey for performance crowns, market share, mind-share, and in this particular space, bragging rights.

In years past, all of those pretty much belonged to Intel, for the most part. But that all changed with the introduction of AMD's Zen architecture. The competitive landscape that now exists is not something we have seen since the Athlon 64 days, and I'd argue AMD is in a much better place now than it was even back then.
AMD has seen continued success with Zen so far, and is really hitting its stride with the third iteration, called Zen 2 (which follows Zen+ and Zen). The latest generation of Zen is based on a 7-nanometer manufacturing process, and the resulting processors are the most compelling to date. That includes the latest round of HEDT chips.

As of this moment, the newly launched Threadripper 3970X is AMD's top consumer chip (and by "consumer chip," I mean it's not a server part like EPYC). It's intended for enthusiasts, and it brings 32 cores and 64 threads of computing muscle to the table, with a 3.7GHz base clock and 4.5GHz boost clock. It also features 128MB of L3 cache.
Meanwhile, Intel just lifted the embargo on its Core i9-10980XE processor based on Cascade Lake-X, which is a beast in its own right. It has 18 cores and 36 threads to throw at multi-threaded workloads, with a 3GHz base clock and 4.8GHz turbo clock, along with 24.75MB of L3 cache.
In a vacuum, Intel's chip is mightily impressive. It offers far more power than the average user will ever need, and can hammer multi-threaded workloads with a whole bunch of cores and threads. But unfortunately for Intel, it does not exist in a vacuum. We posted reviews of both processors, so we have plenty of benchmark data to share. Here's a look at how they fare in Cinebench... 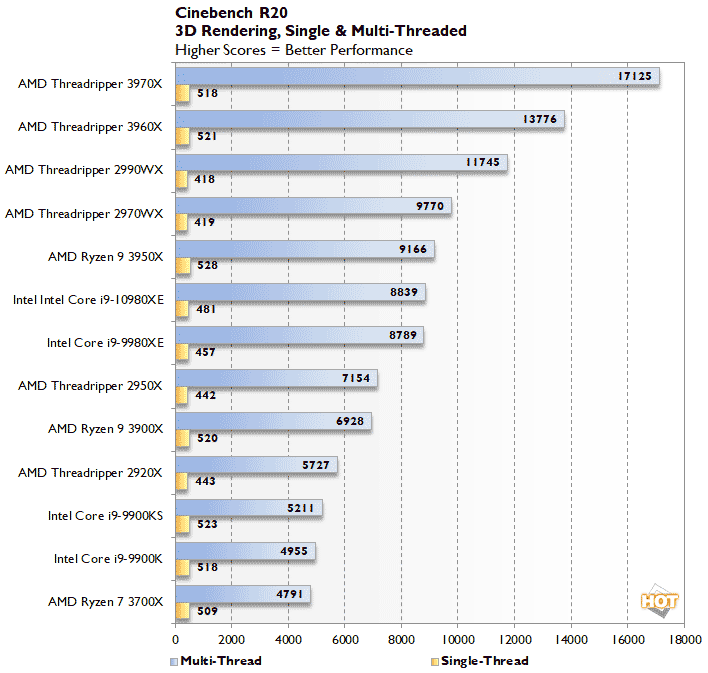 With more cores and threads at its disposal, the Threadripper 3970X is simply better equipped for multi-threaded workloads that scale properly. We see this in Cinebench R20. It's also worth noting that the Threadripper 3970X posted a better single-core score compared to the Core i9-10980XE.
Intel has scoffed in the past at relying too much on Cinebench to compare processors, as it is not indicative of what the average person is likely to run. That's fair, albeit more applicable to mainstream processor comparisons rather than HEDT showdowns.

I won't go through and re-post all of our benchmarks, but we see similar results in other tests as well, such as Blender v2.79 and POV-Ray v3.8a—the Threadripper 3970X is simply faster in programs that can tap into all those cores and threads.
That is to be expected, given the core and thread disparities between AMD's and Intel's top HEDT offerings. But it is still fair to compare the two, as that is precisely what a buyer in want or need of an ultra-performance part will do.
To be fair, there are instances where Intel's Core i9-10980XE is the faster chip. This plays out in some gaming benchmarks, and programs that don't scale all that well with more cores and threads, such as LAME MT. So, it's not a clean sweep for AMD, even though on paper its newest part is much burlier than Intel's.

Still, the latest round of benchmarks should serve as a sobering reminder to Intel that AMD is not a second-class chipmaker these days. Zen 2 is the real deal, and in the HEDT space, the Threadripper 3970X is generally faster and more fully featured the Core i9-10980XE. It's also twice as expensive, as Intel went with more aggressive pricing this time around, to better compete with AMD.
Intel may respond with more HEDT chips, though looking ahead, AMD seemingly has its based covered with another part of its own—the Threadripper 3990X. AMD confirmed the chip today, noting it has 64 cores and 128 threads, along with 288MB of total cache. We don't know what the clocks will be, but in multi-threaded workloads, the Threadripper 3990X will undoubtedly be a monster.
All that said, we're eager to see how things go for Intel once it expands its 10nm offerings, and eventually moves to 7nm. In the meantime, we're just happy to see this be a two-horse race again.