AMD has all the momentum in the world right now, at least in the CPU space, and it will not be taking its foot off the gas pedal. Just the opposite, a supposedly leaked roadmap gives us a tease of what AMD has in store for the next couple of years, with Zen 3 "Warhol" and Zen 4 "Raphael" products in the pipeline for 2020 and 2021.
Where things get a little confusing is in trying to juggle the different code names, nodes, and multiple product families. This is made a bit more difficult than it needs be, with AMD applying the same number designation to different generations of Zen, depending on the product family. For example, Ryzen 4000 applies to both AMD's next-generation Zen 3 desktop CPUs, and its current generation Zen 2 mobile CPUs.
In any event, let's start with a look at the leaked roadmap, as posted by @MebiuW on Twitter and fleshed out by Videocardz, base on other leaks... 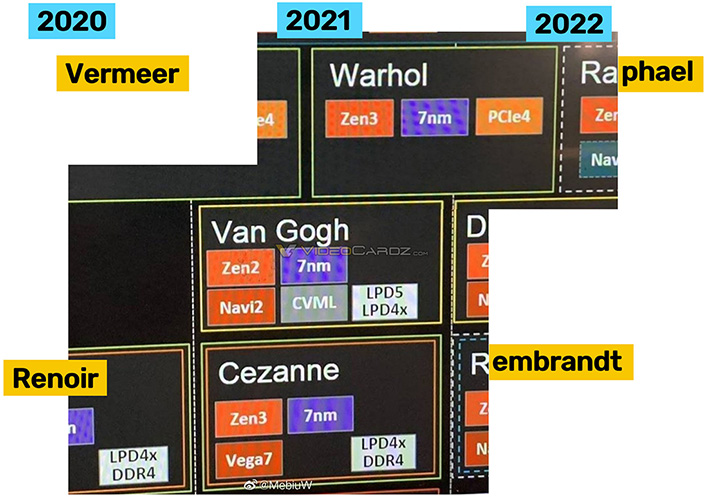 Renoir is already available and is the codename for AMD's Ryzen 4000G series of desktop processors with onboard Vega grapics (APUs, basically). They are available in configurations ranging from 4 cores and 8 threads (Ryzen 3 4300G/GE), to 8 cores and 16 threads (Ryzen 7 4700G/GE), with Pro models mixed into the lineup as well.
Looking ahead, Cezanne will see AMD's APUs transition over to Zen 3, still with Vega graphics, and presumably sold as Ryzen 5000G series. Then will come Rembrandt, another line of APUs, but based on Zen 3+ and featuring Navi graphics (RDNA 2), labeled as Ryzen 6000G series (if AMD follows its same naming scheme, that is).
Sitting in the middle of the roadmap is Van Gogh. That is pegged as a lower power mobile APU, based on Zen 2 and with Navi graphics. We also see a CVML label, which apparently stands for Computer Vision and Machine Learning.
At the top of the roadmap, we see AMD's upcoming Zen 3-based Vermeer desktop CPUs, followed by Warhol and Raphael.
If the roadmap is accurate, Warhol will debut next year, likely on a Zen 3+ architecture. Basically a refresh of Vermeer, while sticking with an enhanced 7-nanometer manufacturing process. The question is, will Warhol be a socket AM4 part, or mark a transition to AM5? We'll have to wait and see.
Then in 2022, we will see Raphael, which will be the first Zen 4-based CPUs. Interestingly, the roadmap also lists Navi in the Raphael block, so perhaps those will ship with integrated graphics. Though of course none of this is official information.