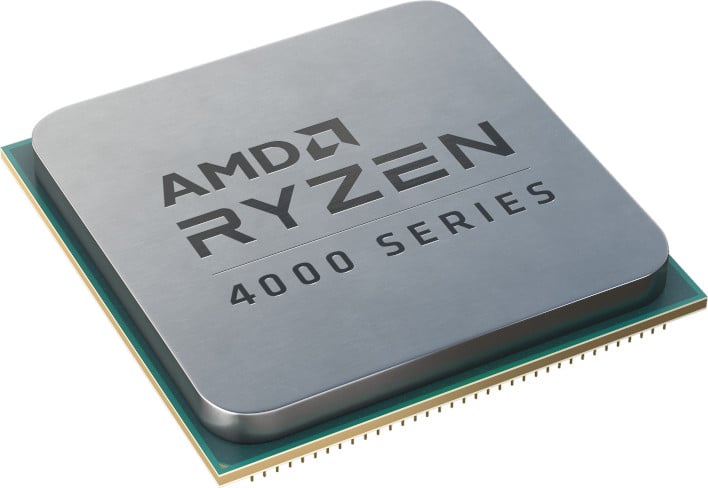 Today is a big day for AMD, as the company looks to spread the reach of its powerful 7nm Zen 2 processor architecture to additional segments. We’ve seen Zen 2 make waves in the server (EPYC 7xx2), HEDT workstation (Threadripper 3000/Threadripper Pro 3000), consumer desktop (Ryzen 3000), and the laptop (Ryzen 4000) markets over the past year. The latest extensions of the Zen 2 family are Ryzen 4000 processors targeting the consumer desktop market.

Although it may be a little confusing, since AMD already has the Zen 2-based Ryzen 3000 family to handle desktop duties, but those processors don’t have integrated graphics cores. This puts them at a disadvantage to Intel processors, which also include integrated GPUs that are capable of regular productivity work, content creation and some light gaming. These new AMD Ryzen 4000 desktop processors now also integrate Radeon Vega graphics engines (with up to 8 cores), which will make them attractive to system builders that want to offer desktop machines without the added cost of including a discrete GPU.

Ryzen 4000G And Ryzen 4000GE For The Consumer Desktop Market

Think of these new Ryzen 4000 socket AM4 desktop processors as juiced-up versions of AMD's already announced Ryzen 4000 laptop CPUs, but with faster base and boost clocks, as well as faster GPU clocks for desktop PCs. You can read our extensive overview of Ryzen 4000 here. AMD can afford to crank up the clocks all around thanks to higher TDPs and the additional thermal headroom that come with the larger, more forgiving thermals of a desktop form-factor.

Also on the menu are three 35-watt processors -- Ryzen 3 4300GE, Ryzen 5 4600GE, and the Ryzen 7 4700GE – which share the same basic hardware configurations as the "G" models, but with slightly lower CPU/GPU clocks to reduce power consumption. 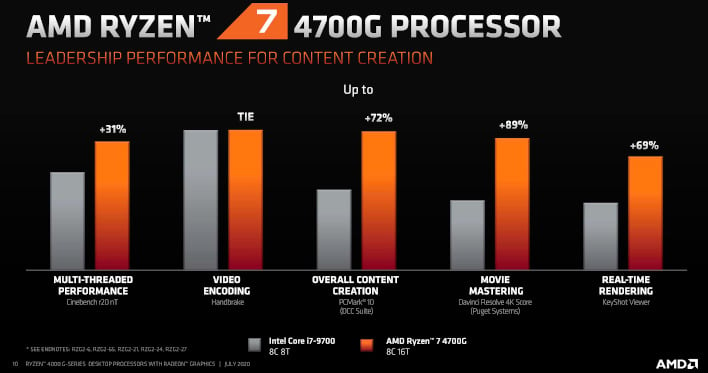 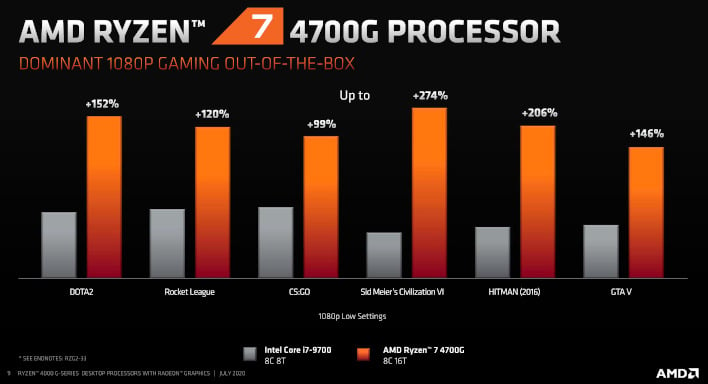 Using the flagship Ryzen 7 4700G as an example, AMD is pitting this chip directly against Intel’s Core i7-9700 (Coffee Lake-S). It’s an interesting comparison given that AMD, 1) didn’t opt for the newer Core i7-10700 (Comet Lake-S), and 2) the Core i7-9700 is an 8-core/8-thread processor. So naturally, the 8-core/16-thread Ryzen 7 4700G absolutely clobbers it in multi-threaded benchmarks. AMD claims that the Ryzen 7 4700G reigns supreme in 1080p gaming benchmarks when using the integrated GPU as well.

If Ryzen 4000G/4000GE is AMD’s latest assault on the consumer desktop market, Ryzen Pro 4000 is looking to make similar waves in the business sector. Like all of AMD’s “Pro” processors, the Ryzen Pro 4000 family includes a dedicated security processor and support for AMD Memory Guard full system memory encryption. AMD also promises 18 months of “planned software stability” and 24 months of guaranteed availability for the processors, which is critical for its business customers.

As you might expect, specs (core/cache counts, CPU/GPU clocks) for the Ryzen Pro 4000G (65W) and Ryzen Pro 4000GE (35W) largely line up with their consumer desktop counterparts.

To address entry-level markets, AMD has also introduced new Athlon Gold 3150G, Athlon Gold 3150GE and Athlon Silver 3050GE processors. Of those three processors the former is the most potent, rocking a 4-core/4-thread design with a maximum CPU clock of 3.9GHz and an on-board Radeon graphics core.

AMD has been on a tear over the past few months, releasing numerous new processors based on its Zen 2 architecture. Not only did we see faster-clocked EPYC processors, but the company introduced more performant Ryzen 3000XT processors along with Ryzen Threadripper Pro 3000. From what we can tell, Ryzen 4000/Ryzen Pro 4000 will be among the last "major" releases for AMD's Zen 2 architecture as it pivots towards Zen 3. Zen 3 will power AMD's next-generation 7nm+ processors, and the first products are on track to launch later this year.